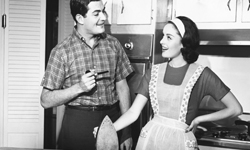 In the 1950s, there was a lurking sense that being a housewife wasn't all it was cracked up to be.
George Marks/Hulton Archive/Getty Images

With the rise of the automobile, dating became enormously popular. Cars allowed men and women to consider a wider range of marriage prospects, rather than settling for someone nearby. During the 1950s, married women became particularly obsessed with having the perfect home, a phenomenon referred to as "the cult of domesticity." Television programs of the era showed wives and mothers baking pies, vacuuming the home and putting dinner on the table promptly at 6 p.m. -- all while wearing pearls and high heels.