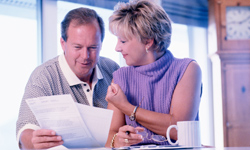 "What's mine is yours" is a common expression between man and wife, but centuries ago, the expression only worked one way, as women gave all of their property to men.
Thinkstock Images/Comstock Images/Getty Images

Slowly but surely, the idea of being in love with the person you married was beginning to take hold, particularly in England and in France. Though marriage still required women to cede their property and their income, they had a greater chance of giving it to a man they actually cared for; it wasn't until 1870 and 1882 that England passed the Married Women's Property Acts, which allowed women to keep money they earned and inherit property. Marriages were still often arranged, but they began to be proceeded by extensive courtships.