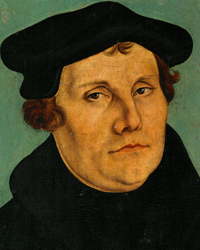 Martin Luther helped pave the way for people slightly related to each other to get married, as he rejected the Catholic Church's restrictions on marriage.
Imagno/Hulton Archive

During the Protestant Reformation, men tried to loosen the church's grip on marriage and put the institution in the hands of the government. Protestants also changed the rules about marrying someone with the same blood or marrying someone in your spouse's family. In response, the church dug in its heels and claimed that true marriages required a priest and two witnesses. No matter the religion, however, women were still treated as a piece of property possessed by their husbands; any money in their purse or land their family held was considered to belong to the man.