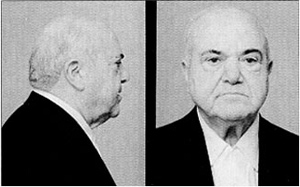 Anthony "Fat Tony" Salerno, a boss of the Genovese family, in an FBI mugshot taken after his arrest on racketeering charges
Photo courtesy

One of the government's most important tools in the fight against organized crime is RICO. RICO isn't a mob informant -- it's a law, the Racketeer Influenced and Corrupt Organizations (RICO) Act, Title 18, United States Code, Sections 1961-1968. It was passed in 1970 specifically to help fight the Mafia. It does this by allowing prosecutors to go after entire organizations. Racketeering (a crime that was invented with the law and is based on the word for Mafia schemes, or "rackets") is making money through an unlawful enterprise that shows a pattern of such illegal moneymaking activity.

Almost any felony falls under racketeering; two or more such crimes must take place with a 15-year period for a conviction to occur. The result is extra jail time if multiple crimes are committed in pursuit of the same general scheme -- that is, bribing a union representative, murdering an uncooperative business owner and extorting money from construction contractors add up to racketeering, a designation that adds decades to the bribery, murder and extortion sentences. Furthermore, members of the criminal enterprise can be prosecuted for racketeering even if they weren't specifically involved in individual crimes. This removed one of the most common defense tactics of Mafia dons -- sending low-level criminals to commit the actual crimes so they could never be prosecuted.

Today, RICO has been used by civil attorneys to get large lawsuit awards from corporations and other groups and is used less and less against organized crime.