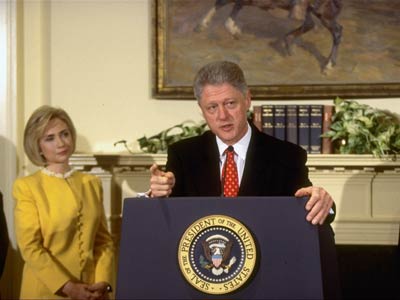 How long have humans been lying? (Don't ask us, we'll probably lie.) There have been so many massive lies throughout history that it's impossible to keep up with them all. Here are a few whoppers of notoriety:

In August 1964, there were two reported incidents of North Vietnamese naval attacks against United States ships in the Gulf of Tonkin, off the coast of Vietnam. The second attack, which reportedly occurred two days after the first attack, never happened. The initial reports were the result of bad weather and faulty sonar and radar readings. Even though there were near-immediate doubts about the event, the supposed attacks were used as justification for the Lyndon B. Johnson administration to initiate military strikes against North Vietnamese forces.
Both the United States and the Soviet Union disseminated propaganda during the Cold War. A good deal of it was meant to influence public perception about the strengths and intentions of each country. Both nations tried to convince the other's populace that they were living in a corrupt society, while simultaneously convincing its own citizens that the other nation was on the verge of attack. Each nation inflated the military might of the other in order to keep their citizens preoccupied with fear, and also to justify increased arms and defense expenditures.
What did they tell him? "Get a good night's sleep, and rest, and go into the test rested and relaxed. Be nice to the polygraph examiner, develop a rapport, and be cooperative and try to maintain your calm" [source: Weiner]. He did, and he passed.

For more HowStuffWorks articles on lying, from how fMRI works to the history behind propaganda, take a look at the links below.