Lobbying and the Law 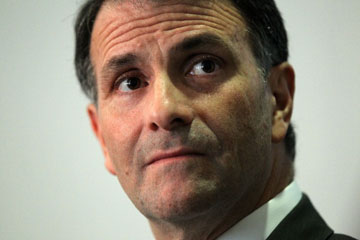 Although the lobbying industry is pretty tightly regulated, some lobbyists, like Jack Abramoff, pay a high price for flouting the rules.
Alex Wong/Getty Images

While lobbyists are indispensible to the function of the American government, they have always been held in high suspicion. As far back as 1876, the House of Representatives required all lobbyists to register. Three years later, it required that members of the press register with the House and Senate to sit in each chamber's press gallery [source: Byrd]. Apparently, lobbyists were posing as journalists to win access to legislators and tweak the facts in their favor.

Today, lobbyists are held accountable by two pieces of legislation, the Lobbying Disclosure Act (LDA) of 1995 and the Honest Leadership and Open Government Act of 2007. As we mentioned earlier, these laws define a lobbyist in very specific terms. The problem with the laws, critics argue, is that they define lobbyists too specifically. It's simply too easy to work around the definition and therefore not be forced to register as a lobbyist.

For example, any activity that's defined as "educational" doesn't count as lobbying. A corporate client can hire an influential ex-senator to give a series of "educational" speeches and seminars on key legislative issues, but that ex-senator doesn't have to register as a lobbyist [source: Grier]. Then there's the time clause of the lobbying law. According to the law, you're a lobbyist if you devote more than 20 percent of your time lobbying for a specific client. But what if you have many clients, or only a small percentage of your advocacy work involves face-to-face meetings with elected officials? Then you don't have to register as a lobbyist [source: The New York Times].

In recent years, Congress has imposed increasingly strict limits on the activities of registered lobbyists. Gifts of any kind or value are pretty much forbidden. Not only must registered lobbyists file quarterly reports detailing the contacts they made with elected officials, but they must disclose how much money they were paid to do it. Registered lobbyists are also required to file semiannual reports listing any contributions made to elected officials or political campaigns. While these requirements are a step in the right direction, critics say, they are ineffective if so few practicing lobbyists are required to register under the current legal definitions.

The American Bar Association (ABA) has a large stake in lobbying legislation, because many lobbyists are also lawyers. The ABA assigned a task force to recommend ways to "restore honor" to the lobbying profession. One of its critical recommendations was to draw a solid line between lobbying government officials on legislative issues and fundraising for them. "Nothing so contributes to the perception of lobbyists as agents of corruption, rather than as public policy advocates, as the confounding of these two functions," writes the ABA task force. "Conversely, nothing will go further to restoring the honor of this branch of our profession than a determined effort to separate, so far as constitutionally and practically possible, the roles of advocate and fundraiser" [source: Fried].

The notorious lobbyist Jack Abramoff, who served more than three years in prison on corruption charges, doesn't believe that new laws like the Honest Leadership and Open Government Act of 2007 have the teeth to change a broken system. "The people who make the reforms are the people in the system," Abramoff told "60 Minutes" in 2011. "Human beings populate our system. Human beings are weak."

For lots more information on political scandals, controversies and presidential elections, explore the related links on the next page.