A Day in the LARP 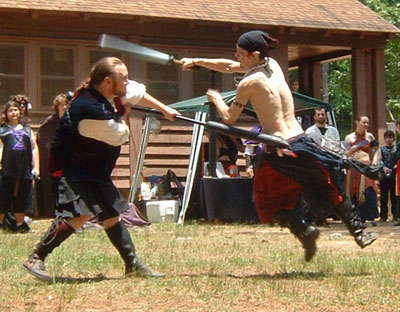 Exactly how a campaign plays out depends on the type of LARP that people are playing. There are three primary ways in which games unfold.

Two groups of opponents face each other on a battlefield. They're dressed in period clothing, including armor, and armed with padded, duct-tape covered weapons called boffers. Someone gives a signal, and the battle begins – the combatants rush at each other, attacking with their boffers until a clear winner emerges. Sometimes, the battle ends when members of only one team are left standing. This is a live-combat or battle game. Dagorhir is a battle game based on J.R.R. Tolkien's Middle-earth. Another battle game, Darkon, has been the subject of an award-winning documentary.

Swords, lances, daggers and even bows and arrows can be recreated as mock weapons called boffers.
Image courtesy Jennie Breeden/Geebas on Parade

A group of people congregate in a room, and a storyteller distributes a card describing a character to each of them. The storyteller describes a scene, and the players use the information from their character cards to decide how to respond to the scenario. They act out their characters' decisions, but they don't engage in any kind of combat. If there's a need to fight, they play "rock, paper, scissors," pull cards from a deck, roll dice or use some other method to determine the outcome. This is a theatrical or non-combat game. White Wolf's "Mind's Eye Theater" games are theatrical LARPs.

Many people arrive at a campground, where they'll be staying for the weekend. These players have either created their own characters and submitted them to a GM or received cards describing the characters they will play. The GM or NPCs give characters information about what's happening in the story and players act out. For example, an NPC might tell the players that a powerful vampire has been terrorizing the village. The players, based on their characters' skills and abilities, decide how to find and attack the vampire, using boffers to simulate the battle. This is a role-playing or role-playing combat game. King's Gate falls into this category. The most well-known role-playing combat game is called NERO.

Players congregate outside the lodge at a LARP venue.
Image courtesy Jennie Breeden/Geebas on Parade

Regardless of which style the game follows, its rule system provides the framework for all of the GM, PC and NPC decisions. Rules cover all the details of game play, including:

Most games have a system for keeping track of all this information. A character's history, skills and attributes are written on a character sheet. In many games, players carry a life ring, a key ring that holds disposable tags that represent spells, hit points, armor points and abilities. The ring may also include a life tag that simply indicates whether a character is alive or dead. When characters cast spells or take damage, they remove the corresponding tags from their rings. Some battle games also have scorekeepers whose only role is to keep track of players' damage and armor.

We'll look at who likes to LARP and why in the next section.

A boffer is basically a piece of PVC pipe or bamboo that's heavily padded, coated with duct tape and shaped to look like a weapon. Players can hit one another with boffers without causing injury. Different games have their own rules governing boffer construction and use, but you can learn more about them at Lukrain's Guide to Boffers.

Rule systems also specify how players must specify when they are out of play – present at the game site but not participating in the game. Anyone who is out of play cannot interact in any way with the people who are in play. Most game organizers encourage players to remain in play whenever possible, but some designate out-of-play areas for players to take breaks or socialize.