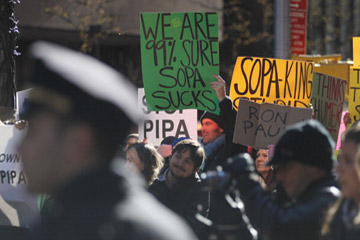 On January 18, 2012, the Internet went dark. OK, not exactly, but it felt that way to regular visitors to sites like Wikipedia, Craigslist, Wordpress and Wired. These high-profile sites – and more than 100,000 others -- shut themselves down for the day to protest two bills in Congress that critics claimed would censor the Web and stifle innovation. The shuttering of so many high-traffic sites, and calls to action by major players like Google, snowballed into the biggest online protest in history.

First, some background: The two pieces of proposed legislation were called the Stop Online Piracy Act (SOPA) and the Protect IP Act (PIPA). Both bills were designed to fight the global epidemic of intellectual property theft. Supporters of the bills, like the Motion Picture Association of America and the Recording Industry Association of America, pointed to the billions of dollars lost each year to file-sharing sites that offer illegal downloads of movies and songs. SOPA and PIPA would give the U.S. Justice Department and copyright holders new tools to shut down these sites or at least bar advertisers and payment sites like PayPal from doing business with them [source: Plumer].

Under existing law, known as the Digital Millennium Copyright Act, a Web site hosting copyright material receives a notice to take down the offending file or be subject to legal action. The big problem with SOPA and PIPA, opponents claim, is that the bills would give copyright owners unfettered power to shut down Web sites without warning or a court order. The result, critics feared, would be unchecked censorship of small, out-gunned sites by big media players. Opponents of the bill also wondered what would happen if media companies began "de-listing" offending Web sites from the Internet. Such tampering with the underlying architecture of the Internet sparked outcry that SOPA and PIPA would "break the Internet" [source: Yu].

The Senate was scheduled to vote on SOPA and PIPA on January 24, 2012. For months leading up to the vote, opposition Web sites had organized small grassroots protests and town hall meetings to draw attention to the bills and encourage concerned citizens to contact their representatives. Still, by mid-January, only a handful of senators had spoken out in opposition of the legislation.

That would all change on January 18. Thanks to the very public outage of Wikipedia and vocal opposition by Google, nearly 10 million people signed online petitions opposing SOPA and PIPA. Over 4 million people sent e-mails to their congressmen and women. And almost a billion people were blocked from visiting "striking" Web sites. Dozens of senators quickly withdrew their support for the bill and the January 24th vote was suspended indefinitely.

For lots more information about protests and strikes, explore the related links below.

Author's Note: What was the largest protest in history?

The first Amendment of the Constitution is simple in its wording, yet profound in its scope. In that single sentence are enshrined the rights of free speech, free press, freedom of religion and freedom of the people "peaceably to assemble and to petition the government for a redress of grievances." As Americans, we respect the right of any individual or group to peacefully protest their cause, whether we agree with their stance or not. And through the powerful examples of Ghandi, Martin Luther King, and the Arab Spring uprisings, the world has witnessed the power of nonviolent protest to move and remove governments. These freedoms are among democracy's greatest gifts, and I'm excited to see the world transformed by peaceful protest rather than military intervention.