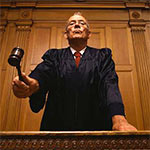 Congress has the power to set up special “legislative courts” whose judges are appointed for life terms by the President and approved by the Senate. Today, there are two special trial courts with national jurisdiction.

The U.S. Court of International Trade deals with cases involving international trade and customs. Previously called the United States Customs Court, the court was expanded and its name changed by the Customs Courts Act of 1980. The courtrooms and offices are in New York City, but the Court is also authorized to hold hearings in foreign countries. Appeals of its decisions can be taken to the U.S. Court of Appeals for the Federal Circuit and then to the Supreme Court. The judges of the Court of International Trade are sometimes assigned by the chief judge to preside over cases in other parts of the country and like other federal judges, they’re appointed for life.

The U.S. Court of Federal Claims calls itself “the People’s Court” and deals with most claims for money damages against the U.S. government, disputes over federal contracts, unlawful seizure of private property by the government and other similar claims. The Court began in 1855 as a body that advised Congress on claims against the United States, but in 1863, it became a forum for citizens to file claims against the government. Sixteen judges sit on the Court, and each serves a 15-year term.