The Supreme Court of the United States 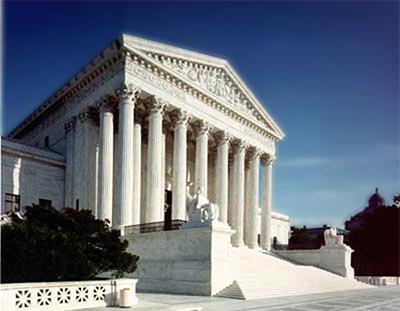 The Supreme Court, which is the only court explicitly created by the Constitution, is the most powerful court in the United States. The Court has nine justices and its decisions cannot be appealed to any other court. For that reason, the Supreme Court is an incredibly powerful and important body, and a nomination of a new justice is an event that attracts significant media attention, debate and even controversy.

Thousands of cases are filed with the Supreme Court every year, but the Court only hears 100 to 150 cases a year. Most cases require the Court to interpret an existing law, the intent of Congress when passing legislation, or whether legislation or acts by the Executive are constitutional. The Supreme Court has original jurisdiction in cases involving foreign dignitaries or when the state is a party, meaning that those cases must first be filed in the Supreme Court but may later be passed down to a lower court. All other cases reach the Court on appeal from lower courts.

Although Congress has the right to decide how many judges are on the Supreme Court, it can’t change the powers given to the Court by the Constitution. The Judiciary Act of 1789 established the Court with one chief justice and five associate justices. Between 1789 and 1869, the number of justices on the Court changed six times but has remained at nine (eight associate justices and one chief justice) since 1869.

The Chief Justice is the “executive officer” of the Court but, like the other justices, has only one vote in deciding cases. In order to decide a case, six justices must vote and a simple majority is all that’s required. When a decision isn’t unanimous, the Court issues majority and minority (or dissenting) opinions. Justices often write separate concurring opinions if they agree with the majority but for different reasons.

An opinion is a document that details the justices’ arguments and the reasons behind their decisions. These documents can also contain decisions about the constitutionality of a law or their beliefs about how a law should be interpreted. Opinions comprise a very important part of what’s known as case law, the law created by judges’ written opinions. Case law and precedent set by the Supreme Court are binding on lower courts. They are also used as a guide in the crafting of future legislation by Congress and as case studies by law school students and legal scholars.

This statue of former Chief Justice John Marshall, possibly the most influential justice in the Supreme Court's history, is located in John Marshall Park, next to the United States Courthouse.
Photo courtesy of United States District Court

One of the most important court opinions came in an 1803 case called Marbury v. Madison. Chief Justice John Marshall issued the majority opinion for this case, which established the concept known as judicial review. Although not specified in the Constitution, Chief Justice Marshall used the case as an opportunity to declare that “a legislative act contrary to the Constitution is not law” and that “it is emphatically the province and the duty of the judicial department to say what the law is” [ref]. In this way, he greatly expanded the powers of the Supreme Court.

Judicial review has also been used to cover state and local governments. The Court can declare their actions unconstitutional and thereby order them to cease the action in question. The most famous example of judicial review is the landmark 1954 case Brown v. Board of Education. In that case, the Supreme Court declared the Topeka, Kansas school board’s segregation of schools unconstitutional. The decision became part of case law and caused all other segregation laws across the country to be declared unconstitutional.