Is it rude to point out someone else's typos? 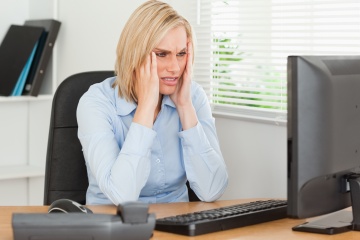 All those typos in company emails driving you crazy? It’s OK: That “there” instead of “their” might have been a simple mistake.
Wavebreakmedia Ltd/Wavebreak Media/Thinkstock

Before we decide whether it's rude to point out typos, let's start with an argument for why typos should live a life of liberty and freedom. To do that, let's acknowledge that some of the most spontaneously happy days of our lives occur when a friend, wanting to meet up with you in a public green space, sends a text message that says, "going to pork?"

Let's not pretend you wouldn't giggle. If your sense of decorum takes over, and you text back "you meant park, I presume" (no smiley face, even), then I hope your life is riddled with typos and you spend your days miserably correcting them forever. Some typos, to put it plainly, should survive to make our existence more fun.

But let's grudgingly admit that not all typos are inherently hilarious. Sometimes they're just sloppy-looking, or worse, leave you struggling to figure out what the person actually meant. In such situations, what are you to do? First, we should probably define a few situations and acknowledge that not all of them should be handled identically.

The first example is probably the one you run into most often: A colleague sends an email with an obvious typo in it. Do you need to let them know? If it's just casual communication, absolutely not. People are allowed to make absent-minded mistakes, and if you spent all your time seriously inquiring if someone would like to meet you for hoppy hour or happy hour, you need a hobby. As Miss Manners points out, you'd be a real gem if you replied to a typo-ridden email that has all corrections to the original tracked and cataloged [source: Miss Manners]. However, it's completely acceptable to point out a typo in, say, a report that's about to go to the boss. In fact, keeping quiet is impolite if it means not helping out a coworker.

But what about public typos that aren't between you and friends or co-workers? If you find yourself staring at a menu that promises "Vial Parmigiana," you could consider pointing out to the waiter that you'd prefer veal, not a vial. But that also requires you to exercise good humor and remember that the person you're speaking to probably isn't responsible or even aware of the mistake. The same should be said of any public typo correction: You shouldn't relish pointing out an inaccuracy. Be nice.