Browse the article Is it rude to knit in public? 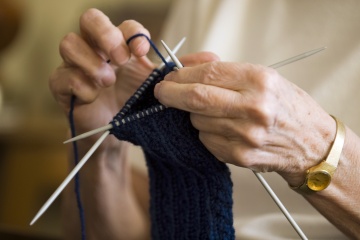 Ah, knitting – a quiet, calming activity that can be simple and rewarding. So what’s the fuss about?
Tony Bock/Toronto Star via Getty Images

The age of the Internet and social media has given rise to a lot of fretting about the loss of manners and common courtesy in society. We treat people badly by using far more aggressive language in online confrontations. We tag people into Twitter arguments, pulling a non-combatant into digital skirmishes. When it comes to the uncharted territory of online etiquette, we're clueless about even the least offensive social action.

Isn't it nice to think, then, that even the oldest social activities are just as confusing? Because there certainly is no rule that tells us if knitting in public is considered rude or perfectly reasonable. Sure, we all agree that loudly singing Taylor Swift songs in line at the DMV deserves some dirty looks (no offense to Taylor) or that the person cutting his toenails at his desk is not really the colleague we wanted. But what about activities we consider benign? Knitting is a quiet activity that doesn't invade personal space, after all. Is there much harm?

Just because knitting is a solitary activity — some practitioners might even argue that it's mindless — doesn't mean that it's free game. While the person doing it might consider it nothing but muscle memory, outsiders could easily take it as a signal that they're boring or uninteresting [source: Craft World].

Consider doodling in a notebook. Few of us would find the behavior troublesome on the subway. It's certainly preferable to someone who is obliviously blasting music or lounging across three seats [source: Fitzsimmons]. If you're giving your tour de force poetry reading at the local bookstore, and you notice a person in the first row is drawing caricatures of audience members as you speak, though, you might find yourself huffing and puffing about the lack of civility in society.

Why? Because we like to think that there are some activities that deserve undivided attention, and it's easy to imagine that knitting, doodling, painting your fingernails or maybe even staring off into space with your mouth agog is distracting someone from the activity at hand.

So here's a good rule of thumb: If you're in a public space where knitting might imply a lack of attention — whether it's your intent or whether it actually is distracting you — hold off those needles.