An April History of Violence 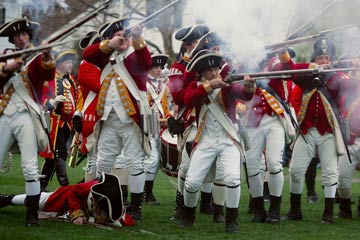 April violence and atrocities are not a new trend. Maybe it's simply a matter of coincidence, but there are a few key historical events that lend credence to idea that bad guys specifically choose the fourth month of the year to strike.

The American Revolution started with gunfire in battles at Lexington and Concord, Mass. on April 19, 1775. It's an important moment in world history that not only signifies the beginning of a brutal war for American independence, but also, for many patriotic folks, represents the revolutionary spirit on which the United States was founded. Across Massachusetts, revelers celebrate Patriots Day -- a state holiday -- on the third Monday of the month (the holiday was celebrated on the 19th until 1968). On the other hand, people who view the federal government as oppressive point to the holiday as a reminder that freedom and liberty often have to come at the end of a gun barrel [sources: The History Channel, Grinberg].

The original Patriots Day isn't the only edition of the holiday to have been marked with bloodshed. In the case of the Oklahoma City bombing -- and some say the Columbine shootings -- April 19 also held particular significance for another reason: the Waco raid anniversary. The federal meddling that led to the botched raid and the deaths of 76 people, the thinking goes, is exactly the same as the tyranny that American patriots fought to repel three centuries ago. In 2013, Patriots Day again turned violent when two pressure cooker bombs went off near the Boston Marathon finish line [sources: Grinberg,Fantz].

Another April 19 event often cited by militants as a basis for armed resistance is the 1943 Warsaw ghetto uprising in which outgunned and undermanned Polish Jews unsuccessfully revolted against Nazi troops planning to liquidate a large portion of the city. Meanwhile, neo-Nazis and other hate groups observe Hitler's birthday just one day later, on April 20 [sources: Berkes, PBS].

So now malcontents and copycats have a handful of reasons for looking to do carnage in mid- to late April. But do they actually target April for violence, or is the connection much ado about nothing?