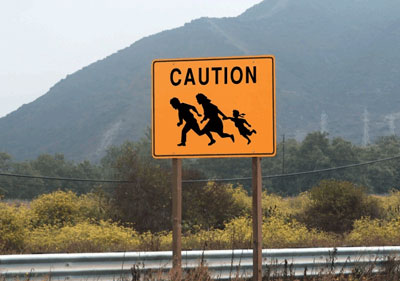 Signs like this one can be found near the U.S.-Mexico border, warning drivers to watch for illegal immigrants running across the highway.
Photo courtesy stock.xpert

­Esti­mates vary significantly as to how many illegal immigrants are living in the U.S. Some experts claim seven million while others say as many as 20 million [ref]. Twelve million is a figure commonly used by news organizations, politicians and some think tanks like the nonpartisan Pew Hispanic Research Center ref. While the U.S. Border Patrol catches many people trying to sneak across the borders, others are smuggled into the U.S. through shipping containers or in vehicles crossing the border. Some Cubans board homemade rafts and try to navigate the 90 miles of water to south Florida. Other migrants risk dehydration, bad weather, difficult terrain and wild animals by trying to cross the long border between the U.S. and Mexico.

All of these methods are very dangerous, and every year people die trying to enter the U.S. Since a fence was erected in 1994 covering parts of the California-Mexico border, around 3,000 people have died trying to cross into southern Arizona.

Although illegal immigrants often fill jobs that Americans don’t want, some people complain that illegal immigrants don’t pay taxes and frequently send their wages to friends and family in their home countries, rather than contributing to the local economy.

One potential solution that has been proposed is a “guest worker” program that would allow employers to hire a foreigner if no American could be found for a job. The foreigner would be allowed to work at the job for a set period -- perhaps three years -- and would be tracked through a federal system. The worker would likely have to pay some taxes while in the U.S., and certain incentives would be provided for the worker to return home after his or her guest worker pass expires. Possible incentives include offering retirement benefits that can only be obtained in the worker’s home country.

The United States’ borders are policed by the U.S. Customs and Border Protection (CBP). The CBP mainly guards against illegal immigration, smuggling of people, weapons and drugs, and insects or other pests that could damage agriculture. The Border Patrol guards more than 6,000 miles of land borders and 2,000 miles of coastal water, utilizing check points, aerial and ground vehicles and high tech surveillance equipment. The Border Patrol also allows an average of 1.2 million people to legally enter the United States every day and is responsible for collecting customs.

If the Border Patrol has thousands of employees and such sophisticated equipment, then why are we always hearing about “broken borders”? Well, first of all, they have a lot of area to cover. The U.S. has extremely long borders, and having a person there to cover every inch of the border is almost impossible. And, though they catch many people trying to sneak across the borders, thousands of people do manage to enter the United States illegally every year (500,000 by some estimates), which raises many concerns, including terrorism.

In September 2006, Congress passed a bill to build 700 miles of fencing along the Mexico border. Since 1994, the U.S. government has been building a fence along parts of the California-Mexico border, though that fence still isn’t finished. While the new fence is very ambitious, it may never be built. To build 700 miles of fencing would be extremely expensive -- estimates range from $4 to $8 billion for a physical fence, and a “virtual fence” that uses sophisticated surveillance technology could cost up to $37 billion! Besides the cost, there is potential damage to wildlife preserves, and the migratory paths of animals such as mountain lions, deer and coyotes would be disrupted. Also, several American Indian tribes have claims to land that the proposed fence would cross. Other opponents to the fence call it a “new Berlin Wall” and say that, for a country that owes much of its success to the contributions of immigrants, it’s the wrong message to send [ref].

Congress passed a bill to extend this fence to cover the entire U.S.-Mexico border, but the question remains of whether it will ever be built.
Photo courtesy stock.xpert

Some groups have decided that a border fence is important enough to them that they want to build it themselves. The Minutemen Civil Defense Corps, one of several civilian groups that "police" the border, has begun building a fence of its own along a 10-mile stretch of land in Arizona. As of November 2006, they had completed about a mile of their planned fence, relying on donations from the public to pay for materials.