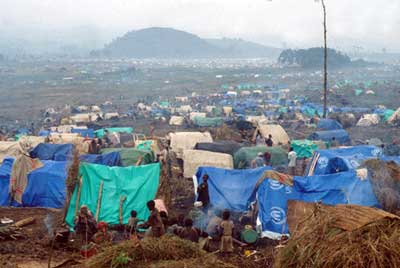 After the genocide in Rwanda in 1994, many refugees fled to camps such as this one, located in what's now known as the Democratic Republic of Congo.
Photo courtesy Centers for Disease Control and Prevention

­At the end of 2005, there were approximately 8,394,500 refugees in the world, compared with 9,543,500 at the start of the year, according to the UN High Commissioner for Refugees (UNHCR) [ref]. More than two million of these refugees were from Afghanistan.

The term refugee generally refers to someone who is outside his or her country and is fleeing persecution, though the president has the right to grant individuals refugee status. Every year the State Department submits a report to Congress with proposed refugee admissions and then the president works with Congress to determine the number of refugees who will be admitted in the upcoming year. For the 2005 fiscal year, the following numbers of refugees were admitted to the U.S. from these regions:

Refugees may be eligible for resettlement in the U.S. if the UNHCR or the U.S. embassy refers them, or if they are members of other groups determined eligible by the U.S. government (see The Worldwide Priority System).

Like with asylum, a refugee has to prove that he or she has a “well-founded fear of persecution” and has not participated in the persecution of others. A refugee is not eligible for resettlement in the U.S. if he or she is already resettled in another country or holds dual citizenship. If a refugee is a relative of a U.S. citizen, he or she should apply for an immigrant visa.

A refugee may also be eligible for Temporary Protected Status (TPS). During the TPS period, a refugee may stay in the U.S. and apply for work authorization. At the moment, TPS is eligible to people from Burundi, El Salvador, Honduras, Liberia, Nicaragua, Somalia and Sudan. Temporary Protected Status does not lead to permanent resident status, and when the TPS designation is terminated, the refugee reverts to his or her pre-TPS immigration status. Because of this, a person who falls under TPS should pursue options for permanent resettlement before his or her TPS expires.