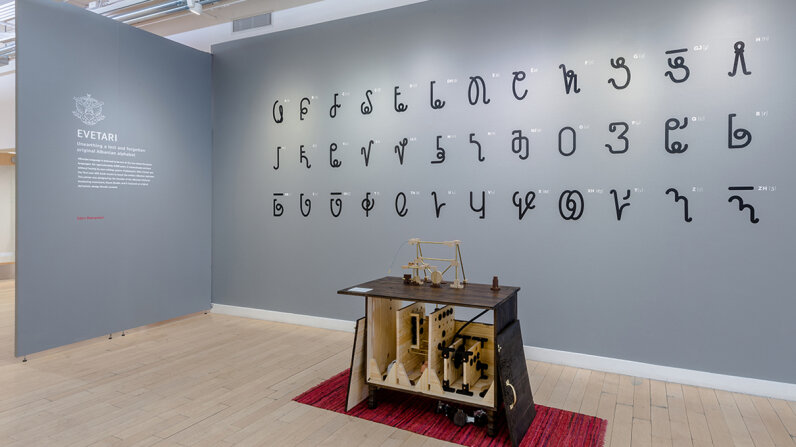 There are a few superstars in the Indo-European language family, including the Germanic, Greek and Italic (or Latin) branches. But you might be surprised to learn that Albanian — spoken by more than 7 million people in Albania, Kosovo and other Albanian enclaves throughout the world — is its very own subgroup of the Indo-European family.

The language has been kicking around since at least the 15th century, but it was only in 1909 that a formal roman-style orthography (or written alphabet) was adopted for Albanian, as Latin and Greek were the languages of "official" business for centuries.

At least that's part of the story — an Albanian scholar named Naum Bredhi developed a non-Latin alphabet for the language and disseminated it in the mid-1800s. It was considered lost, since Latin-based typesets proved easier to print and kicked Bredhi's designs to the curb centuries ago. But recently, a master's student stumbled upon the unique alphabet.

Edon Muhaxheri, a native Albanian speaker from Kosovo, was studying illustration practice at the Maryland Institute College of Art (MICA) in Baltimore. For his thesis project, he wanted to create an automaton (a small machine from the 19th century that didn't rely on electricity) that could write in Albanian, and he began researching what the Albanian language looked like in the 1800s.

It was during this research when he found the first-ever Albanian alphabet book, "Ëvetari," published in 1844 by Bredhi and designed to teach kids the alphabet. Muhaxheri had known about the book, but he hadn't realized it contained an Albanian alphabet called Vithkuqi that didn't use Latin characters, but completely original ones that were made to be religiously neutral. Bredhi's alphabet is one of many Albanian alphabets created before the 20th century, but it never caught much steam and faded out of popularity soon after its release.

Using Bredhi's illustrations of the calligraphic Vithkuqi letters, Muhaxheri redesigned the alphabet into a simpler digital font dubbed "Albanian Helvetica." Muhaxheri's discovery even elicited interest from the Albanian government, and the Museum of Education in Albania — where he found the book — has plans to prominently display the alphabet for historical preservation and education.

Now That's Cool
Muhaxheri said in an interview with Design Week that the Vithkuqi font, due to be released in December, would be a good fit for logos, tattoos and state symbols.