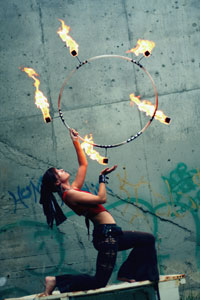 Modern hula hooping exceeds the meager limits of the nearest backyard, beach or fitness class. Like any popular pastime, hooping has splintered into a number of colorful subgenres and styles that range from playfully sensual to politically volatile.

Burlesque hoops: Hula hoops can convey both feelings of childhood innocence and grown-up sexiness, but they also resonate with '50s and '60s nostalgia -- which makes them a perfect fit for the world of neo-burlesque. A modern revival of Victorian and 1960s American burlesque traditions, this performance art combines elements of vaudevillian comedy, modern dance, striptease and cabaret. The hula hoop has become such a staple of neo-burlesque that The New York School of Burlesque devotes entire classes to its use.

Hoops of flame and light: Venture out to a concert festival like Coachella or Bonnaroo and you'll definitely see some hula hoops on your fellow music fans. Some of the circles will boast handcrafted, colorful wraps. Others will blaze with glow sticks or LEDs (light-emitting diodes). Venture out to the annual Burning Man art event in Nevada's Black Rock Desert and you might even get to see some flaming hula hoops. Fire dancers incorporate open flames into the dance, typically with the aid of torch-tipped fire staffs or a flaming wick on a chain called a fire poi. Some fire dancers have also incorporated the hoop, but fear not! The actual hoop isn't aflame. A fire hoop features four to six wick-tipped arms that extend out from the hoop.

Provocative art hoops: A fire hoop may sound potentially dangerous, but it's nothing compared to the work of Israeli sculptor and video artist Sigalit Landau. Her 2003 video piece "Barbed Hula" depicts the artist's nude torso as she twirls a barbed wire hula hoop around her waist, visually raising bloody whelps on her skin. Far from a mere act of masochism, Landau had a very specific political and artistic message in mind. In the video, she spins the barbed hula hoop on an Israeli beach that she defines as, "the only calm and natural border Israel has" [source: Landau].

Hoop swords: Barbed wire hula hoops are one thing, but has anyone ever made a weapon out of one? Maybe not in real life, but the idea emerges in the fictional world of video game fantasy. The 2005 fighting game Soulcalibur III featured a female fighter named Tira who, in addition to dressing like a Cirque du Soleil performer, brandishes a hoop-shaped weapon called the Eiserne Drossel, which is German for "iron thrush." The weapon resembles a large, steel hula hoop with serrated blades on the outside. Her fighting style incorporates various aspects of modern hoop dancing that spin the blade like a buzz saw. The 2010 Hong Kong martial arts film "True Legend" also features a hooplike weapon.

Whether they're slicing into bad guys, explaining cosmology or just spinning around our waists rhythmically, hula hoops continue to fascinate us. Individual fads may come and go, but the hoop is here to stay.

Explore the links below to learn even more about hula hoops.