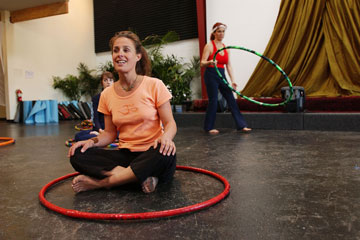 There's more to hula hoops than fun, games and the birth of the universe. Fitness hoops featured prominently in 19th-century eurhythmics classes of Europe, and although the term "hula hoop" didn't enter the public vernacular until the 1950s, hoop exercises were a part of British and Australian fitness programs in the '30s and '40s [source: Martin].

Just a few years into the 21st century, a new hula hoop epidemic began to sweep the United States. This time, however, its carriers were fitness-savvy adults instead of 10-year-old children. Film actor Marisa Tomei attended hoop fitness classes to get in shape for her role in the 2008 film "The Wrestler." In 2009, U.S. first lady Michelle Obama hooped on the South Lawn of the White House to promote exercise and healthy eating for children [source: Hamill]. Obama busted out her hoop again at the 2011 U.S. Open, too.

So does slinging a hula hoop around your waist provide a decent workout? You bet your abs it does. A 2011 study sponsored by the American Council on Exercise put 16 women between the ages of 16 and 59 to the test. The participants averaged 151 heart beats per minute, burning 7 calories a minute, or about 210 calories during a half hour of hooping [source: Goodman]. To put that in perspective, the average 154-pound (70-kilogram) person burns approximately 220 calories during a half hour of heavy yard work or vigorous weight lifting [source: CDC].

Participants in the 2011 study used weighted hula hoops to achieve their level of workout. Not only do weighted hoops increase the effectiveness of hoop-based exercise, the added weight also makes it easier to keep up the hoop's momentum around your body. Bear in mind, however, that weights make some hula hoop tricks easier to perform and some more difficult. Filling hoops with sand or water to increase the weight may also make the hoop unbalanced.

Hula hoop workouts vary, but many incorporate a mix of hoop-dancing maneuvers and hoop-assisted yoga or aerobic moves. However you choose to play it, just be sure to keep up the motion. The U.S. Department of Health and Human Services recommends a weekly regimen of at least 150 minutes of moderate aerobic exercise or 75 minutes of vigorous aerobic exercise.

Still, don't be surprised to see the hula hoop fitness craze die down. In 2010, exercise physiologist Neal Pire told The New York Times that he expected the hoop to eventually go the way of the medicine ball, becoming a mere occasional tool in the exercise classroom as opposed to the headlining star.