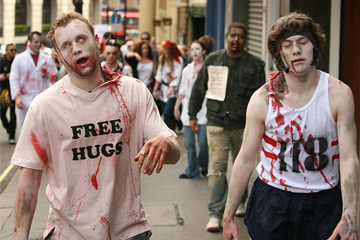 Even zombies love a good flash mob (or, in this case, "Fleshmob").
Peter Macdiarmid/News/Getty Images

In the spring of 2003, editor and New York City boy Bill Wasik had an idea. Wasik was part of a community of creative types who were constantly hunting for the next artistic thing-of-the-moment. Bill thought it would be funny to turn these "scenesters" themselves into "the next big thing." He created an e-mail address, themobproject@yahoo.com, and forwarded an e-mail to himself with instructions to show up at 7:24 p.m. on June 3, 2003, for a gathering called "Mob #1." Inexplicably, the gathering was to take place at Claire's Accessories, a hole-in-the-wall shop on Astor Place. Wasik then forwarded the email to about 50 friends, who were never meant to know that he himself was the organizer. "I thought of it as a stunt that would satirize scenester-y gatherings," said Wasik, in an interview with Stay Free! Magazine and blog.

Wasik's first flash mob was a bust. When he and the other mobbers arrived at Claire's, they discovered that someone had tipped off the shopkeepers. Worried that the mysterious gathering might be a part of a terrorist plot, police blocked off the sidewalk in front of the store. To prevent this outcome in the future, Wasik "hit on the notion of meeting in pre-mob locations, and… hand[ing] out flyers with the mob location" [source: Heaney]. Mob #2, the first successful flash mob, was held in the rug department at a Macy's store in Herald Square, New York City, on June 17, 2003. About 100 people crowded around an expensive carpet, claiming to be in the market for a "love rug." When pressed for details, the mobbers claimed to be members of a free-love commune who made all purchasing decisions as a group. After about 10 minutes, they departed, leaving the sales staff and curious shoppers scratching their heads in bemusement [source: Nicholson.]

By Wasik's definition, a flash mob should last no more than 10 minutes and feature some "inexplicable" act [source: Wasik]. Between June and September 2003, Wasik planned and executed eight flash mobs in New York City. Media outlets covered these events, and soon flash mobs began popping up in other urban areas. Today, being part of a flash mob is something many of us would love to experience.

In this article, we'll talk about how you can find out about a flash mob. First, however, let's take a look at the different types of flash mobs that exist today. 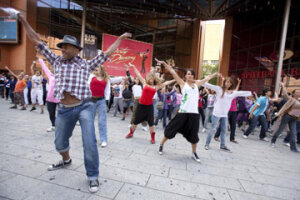 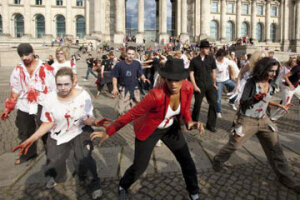 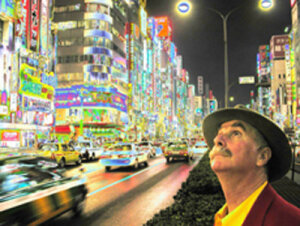