How the NAEP Works 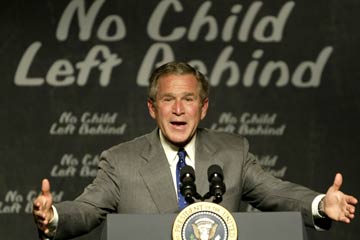 Then-President George W. Bush speaks on the fifth anniversary of the passage of the "No Child Left Behind" act while at the North Glen Elementary School, Maryland in 2006.
© Larry Downing/Reuters/Corbis

NAEP results indicate that only a little more than one-third of U.S. students are "proficient" in math and reading and that Grand Canyon-sized gaps in performance among race remain. Or, as one commentator put it, the results show that the "No Child Left Behind" (NCLB) program in place since 2001 and aimed at beefing up test passage rates and shrinking learning divides has been "an abject failure" [source: Strauss]." Among other provisions, NCLB requires all public schools in the U.S. that receive federal funding to administer state-issued standardized tests each year and mandates that poor performing schools make certain efforts to increase scores. Educators and policymakers often look to NAEP performance to gauge whether the program is "working." But detractors argue that NCLB simply forces educators to focus on teaching students how to pass the tests rather on knowledge and learning [sources: Finn, Hobart].

Critics of NAEP say that the tests simply are not a good barometer of future success because they don't measure the qualities necessary for navigating life in and out of the classroom, such as interpersonal communication skills or resilience. Others go a step further by claiming that the NAEP's proficiency standards are completely arbitrary [sources: Whitehurst, Strauss].

Detractors typically lock in on the NAEP's definition of "proficient," which has been referred to as an "aspirational" goal rather than an indication of whether a child can adequately read, write and solve math problems. Indeed, a much higher share of students is often deemed "proficient" in various subjects via state-issued testing than under the nationwide assessments. That's likely because NAEP proficiency is a higher standard than mere "grade-level" performance. It's not exactly clear, however, why the bar is set all the way up there. In 2009, a University of Nebraska report scolded NCES for failing to clearly define just how assessment results should be interpreted and used [sources: Harvey, Hull].

Yet, even if the proficiency determination is flawed, the NAEP's strength remains its ability to track progress on the standardized tests year after year (after year, after year). Putting proficiency levels to the side, score comparisons show that students are improving in most subjects over time, albeit at a fairly slow rate [source: Harvey].

In the meantime, efforts are underway to enhance the current assessment system.