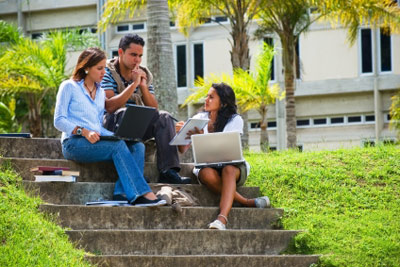 The Net Generation is constantly connected. Not just to the Internet, but to each other. What would instant messaging be, after all, without a buddy list? For the Net Generation, technology offers a way to constantly be in touch with old and new friends.

The powerful combination of cell phones, text messaging, instant messaging and e-mail means that Net Generation students are always mid-conversation with one or more friends either online, in person or both at the same time.

Social networking is a fancy word for a Net Generation way of life. The Net Generation Survey found that 69 percent of college students surveyed had a Facebook account. Let's not even get into MySpace. What these and many other Web sites offer is a quick way to post a personal profile and start reeling in the "friends."

Net Generation students are open and emotionally honest in their online communications. For many, their blogs are literally online diaries, where no topic is taboo. With the popularity of YouTube, more and more students are posting vlogs, or video blogs, that cut out the middle man by talking straight to the viewer. It's this emotional honesty that helps members of the Net Generation connect to each other so quickly and feel they are lifelong friends.

Social networks are not static creatures. For the Net Generation, they blend and crossover into academic and professional circles, adding new demands to old institutions, like the professor-student relationship.

For many professors, old and young alike, this level of access is impossible, but all agree that it's one of the powerful new realities of teaching the Net Generation.

One of the more surprising results of the Net Generation Survey is that, on average, the Net Generation college student speaks to one or both of his parents 1.5 times a day. Researchers have found that Net Generation students have very close, open relationships with their parents, with whom they share many of the same values.

Part of this constant communication can be credited to cell-phone technology. Net Generation students have had their own cell phone as long as they can remember, and they've been checking in with mom and dad ever since. Those parents might be disappointed, however, by a recent survey by the Pew Internet & American Life Project which found that 39 percent of 18- to 29-year-olds lied about their location when talking on a cell phone

Next, let's talk about how the Net Generation student views the world and his role in making it a better place.