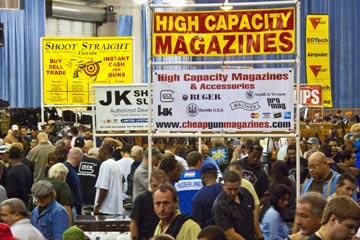 Perhaps the greatest factor crippling the background-check system in the United States is right there in the Brady law: Mandated background checks apply only to Federal Firearms Licensees.

FFLs were established in the Gun Control Act of 1968, which required anyone in the "business" of selling firearms (through retail store or pawnshop) be licensed by the federal government. With that license comes the background-check requirement.

Those who are not in the "business" of selling guns need not obtain a license, and therefore need not perform background checks. This can include people who sell guns occasionally at gun shows, where stalls may display a "private" sign to let potential buyers know there will be no background check performed [source: Kirkham].

Guns sold online, or to a friend living down the street, are also in the "private" category. Only about 25 percent of U.S. states require background checks or record keeping for at least some private sales [source: Kirkham]. A whopping 40 percent of all gun transfers fall into the private sale category [source: National Law Enforcement Partnership]. A Bureau of Justice Statistics survey of prison inmates found that 80 percent of those who'd used a handgun in their crimes got them through a private transfer.

These "private sale" exceptions are likely the greatest hindrance to the effectiveness of the background-check system. Numerous pieces of federal legislation have attempted to make background checks universal in the United States, all failing to make it out of Congress. This is typically attributed to objections by the politically powerful National Rifle Association, or NRA.

The organization's leadership believes expanding background checks would affect only law-abiding citizens and would ultimately lead to the formation of a federal gun registry, enabling government confiscation or increased taxation of legally owned guns. They point out that the same inmate survey showed less than 2 percent got their guns from a gun show or flea market. Most got their guns from "friends or family" or from "the street/ illegal source" (e.g. by theft) – all of which were counted in the private transfer number [source: NRA-ILA].

After the Newtown, Conn., school shootings in 2012, one poll showed 91 percent of American voters and 88 percent of gun owners favored background checks on all gun sales, including private ones [source: Schoen]. In 2013, yet another bill was introduced to accomplish that and voted down by the Senate [source: McAuliff].

For the time being, that leaves universal background checks in the hands of the states, and evading one a simple matter of crossing state lines to find an unregulated private sale. Or else going to the black market. Though many don't see what the difference is at this point.

When explaining a "conversation" as socially and politically divisive as gun control, a writer is faced with a lot of decisions along the way in the interest of objectivity. I made every effort to stick to the facts and relied heavily on statistics from primary sources like the FBI and the ATF. Doubtless, some readers will read a bias, one way or another. Some don't necessarily trust the FBI and ATF to provide accurate statistics in the first place. Those were my best options, though, and so I went with it. Numbers are notoriously difficult to pin down, so view all counts and percentages as estimates.