In April 1980, members of the Democratic Revolutionary Movement for the Liberation of Arabistan took over an embassy at Princes Gate in London, England. The terrorists took 26 hostages in their quest to liberate the Iranian province of Arabistan.

Negotiators kept the terrorists' leader talking for three days, giving him media coverage of his demands (despite a botched reporting job by the BBC that sent him into a rage) and winning the release of two ill hostages. They earned his trust and got him to relax several deadlines. They also kept him focused on the micromanagement of small details, such as the type of bus he wanted, what kind of food to bring in and other minor matters.

Throughout the standoff, police were working to obtain intelligence about the inside of the building, a complex layout of offices. Information came from released hostages, food deliveries and cameras and microphones hung down chimneys or through walls.

Unfortunately, the terrorists executed one hostage (reportedly because he debated the merits of Islam with them), which forced British forces into action. They combined a carefully planned assault with a distraction provided by the negotiator. This was a breach of standard protocol -- usually, negotiators are not told when there is going to be an attack because it is too difficult for the negotiator to avoid giving anything away through tone of voice or choice of words. In this case, however, keeping the terrorist leader on the phone would keep him away from the windows, giving the troops some extra time to get into the building before the hostage-takers discovered the attack [ref].

The assault was a relative success. The terrorists killed one hostage when they realized they were under attack, and the remaining hostages escaped the building alive. British forces killed five terrorists during the assault, including the leader, and arrested the sixth.

In the next section, we'll find out how someone becomes a professional hostage negotiator.

Lt. Schmidt described a relatively "typical" incident that was resolved peacefully because the crisis negotiators followed their training. The first phone call came from a woman who was involved in a domestic dispute with her husband, who was angry and carrying a handgun. Although he had not pointed it at her, she was frightened and secretly called the police from another part of the house.

When the Cheektowaga police responded, they deployed their tactical unit, which is a S.W.A.T. team, to set up a perimeter around the house. A tactical support unit, which sets up communications equipment, handles logistics and includes the negotiators, backed up the S.W.A.T. team. Whenever possible, the tactical support unit uses two negotiators, a primary and a secondary negotiator. In this case, Lt. Schmidt was acting as the secondary.

They made contact by phone with the hostage-taker and continued negotiating with him for several hours. The negotiator built up a rapport with him by discussing the marital problems that had lead to his "crisis point." Although he had still not fired the gun or aimed it at anyone, he had made threats to use it, so there was a real danger to the hostage and police. In the end, because they had built a relationship with the hostage-taker, they were able to convince him to leave the gun inside the house and come to the front door to surrender. "It's very important to get them to leave their weapons behind when they surrender," said Lt. Schmidt.

The S.W.A.T. team took the hostage-taker into custody without incident. 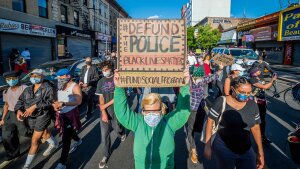