The EPA Defends its Actions 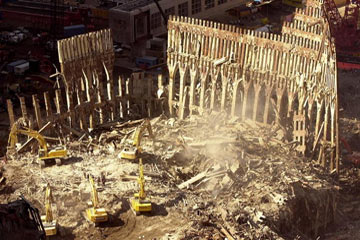 A study released in 2006 by Mount Sinai Hospital in New York found that seven out of 10 ground zero rescue workers had new or worsened lung problems after the attacks [source: Klatell].

Could these problems have been prevented? And who was responsible? Questions arose regarding the EPA's guidance and whether or not the federal government had done all it could do to protect workers and residents of Lower Manhattan.

In June 2007, a Congressional hearing was held on the government's environmental response to 9/11. Whitman defended her statements assuring the public that the air in Lower Manhattan was safe in the days following the attacks. "Every statement I made was based on what experts, who had a great deal of experience in these things, conveyed to me, " she said [source: DePalma].

The committee referenced the 2003 OIG report that concluded that Whitman didn't have enough scientific information to state that the air was "safe to breathe."

Another line of questioning involved whether or not communications were being heavily screened. Whitman said she was aware of only one instance in which important information was removed from a statement by the President's Council on Environmental Quality, which edited the statements in the aftermath of the attack. She had urged residents to have their apartments professionally cleaned; the statement was removed after the release was sent to the White House for review. Instead, the public was told to follow instructions from New York City officials.

Whitman denied claims that she had been pressured to declare the air safe so that the financial district could be reopened. She reported that there were discussions about evoking the federal Superfund law that would've given the EPA broad powers to control the ground zero site, but that concept was rejected in favor of collaboration with New York City officials.

In the same hearing, John Henshaw, a former assistant secretary of labor who led the Occupational Safety and Health Administration in 2001, defended the EPA's decision not to enforce strict regulations on the use of respirators by ground zero workers. Instead, he said the agency partnered with the city and the construction companies working at the site to encourage them to comply voluntarily with the regulations [source: dePalma].