What's Next for the Green New Deal?

by John Donovan Apr 3, 2019
Sen. Ed Markey speaks alongside Rep. Alexandria Ocasio-Cortez and other Congressional Democrats during a news conference in front of the U.S. Capitol on Feb. 7, 2019 as they unveil their Green New Deal resolution. Alex Wong/Getty Images

The Green New Deal is nothing if not wildly, proudly, unapologetically ambitious. It's a bodacious cards-on-the-table challenge to everyone who doubts the seriousness of climate change and to everyone who lacks the sense of urgency — or the guts — to act on it.

So to think, after the Republican-controlled U.S. Senate voted in late March to quash the Green New Deal (though technically was a non-binding resolution, meaning in no way would it have become law; the Senate shot down even talking about it), that this pie-in-a-clean-sky idea has gone belly-up for good is not giving it nearly enough credit. The Green New Deal, in oft-changing but always-bold forms, isn't going anywhere.

"I think the Beltway mentality that, 'Well, the resolution didn't pass, so this goes away'... most people aren't necessarily following what happens in Congress," Nicole Ghio, the fossil fuels manager for the environmental group Friends of the Earth, says. "What [people] demand is not based on a vote — a very cynical vote — that happened in the Senate. What we're going to see is people continue to mobilize around the country for meaningful action on climate. That already has changed the debate and will continue to change the debate."

What Is the Green New Deal?

The Green New Deal, as many know it today, is a resolution that was sponsored in the Senate by veteran Democrat congressman Ed Markey of Massachusetts and, in the House, by freshman Democrat Alexandria Ocasio-Cortez of New York. It calls for the creation of a new federal program, a Green New Deal, that would combat climate change and do nothing less than recast the nation's economy, addressing a huge number of national ills — from income inequality to social and racial injustice to health care to a living wage — in doing so.

It takes on more, too. Way, way more. The Green New Deal is crazy ambitious, and in that way not unlike its namesake, Franklin D. Roosevelt's "New Deal" of the 1930s, designed to lift America out of the Great Depression.

"In the past, when we've confronted this type of stagnation and this type of systemic threat as a country ... the answer has been an ambitious and directed mobilization of the American economy to direct and solve our biggest problems," Ocasio-Cortez told a town hall-type meeting on MSNBC. "To get us out of this situation, to revamp our economy, to create dignified jobs for working Americans, to guarantee health care, and elevate our educational opportunities and attainment, we will have to mobilize our entire economy around saving ourselves and taking care of this planet."

The Green New Deal is, to its many critics, naively impractical and prohibitively expensive. It calls for a completely clean-energy future for America, carbon-neutral, by 2030. That means goodbye coal, goodbye fossil fuels, goodbye nuclear, goodbye anything that runs on "dirty" energy (including, notably, the economy as we now know it).

The devil of the Green New Deal is, of course, in the details. But the resolution, simply and admittedly, doesn't sport many of those. To be fair again, it's just a resolution, not legislation. It is considered by many to be a starting point.

Still, the Green New Deal is clear in its goals, which include:

The Green New Deal would mean an end to all fossil fuels, including the coal mined from places like the Savage Energy Terminal in Price, Utah seen here.
George Frey/Getty Images

It should be pointed out that this current Green New Deal is just the latest, hottest incarnation of a Green New Deal. New York Times columnist Thomas Friedman may have coined the term in 2007. President Barack Obama put the idea on his platform, without much ado, in 2008. Green Party candidate Jill Stein ran for president with a Green New Deal in the 2016 election. The Sunrise Movement pushed for a Green New Deal in a protest in the offices of Democrat House Speaker Nancy Pelosi after the 2018 midterm election.

This in-the-news version has its defining characteristics, but it's much like others, past and present, in that it would require a huge, unprecedented economic investment. Or, as Friedman put it back in 2007:

"We will only green the world when we change the very nature of the electricity grid — moving it away from dirty coal or oil to clean coal and renewables. And that is a huge industrial project — much bigger than anyone has told you. Finally, like the New Deal, if we undertake the green version, it has the potential to create a whole new clean power industry to spur our economy into the 21st century."

What Happened with This Green New Deal?

In an only-in-politics show of solidarity — and with the realization that, in the Republican-majority Senate, the resolution would be defeated (again, before it was even considered or assigned to committees or debated or any of that) — Democrats (most of whom backed the resolution) instead voted "present" when McConnell forced the vote. The resolution, of course, died anyway.

In the House, the Ocasio-Cortez companion resolution still lives on, though its future is uncertain. For her part, Ocasio-Cortez is not backing down. She assailed lawmakers who ridiculed the Green New Deal, calling them "fools," and in floor speech warned that the costs of a Green New Deal are nothing compared to what lies ahead without one.

"I think a lot of that is political posturing," Nathaniel Keohane, the senior vice president of climate for the Environmental Defense Fund, says in regard to the Senate vote. "What I think is most striking there is the kind of thinking behind that is already out of date, in the sense that there is overwhelming and increasing popular support for climate action."

A March 2019 Gallup poll found that a majority of Americans, for the first time since 2001, are what Gallup calls "concerned believers;" that is, they are "highly worried about global warming, think it will pose a serious threat in their lifetime, believe it's the result of human activity, and think news reports about it are accurate or underestimate the problem."

More than 60 percent of Americans told Gallup pollsters in 2018 that the government is doing too little to protect the environment. That's a 12-year high on that topic.

That kind of grassroots sentiment, Friends of Earth's Ghio says, is beginning to trickle up. Politicians, despite what happened in the Senate, are starting to get the message. Virtually every Democrat who is running for president in 2020 has backed the idea of a Green New Deal, if not the current congressional resolution. House Republicans have introduced at least one resolution that addresses climate change.

Many groups are working on blueprints to provide details on a new GND, including what the latest congressional resolution did perhaps better than any previous version — linking a clean-energy future to jobs and a new economy that would ease many of society's problems.

The trick, now that the idea is picking up steam, is to come up with plans that are acceptable to a majority of Americans ... and then convince politicians to enact them.

"Right now, we think we are at a time where getting more voices into the discussion and more ideas on the table is critical," Keohane says. "I think the Green New Deal has done an amazing job of energizing the conversation in a way that it hasn't been in a decade. I think that can only be a good thing for the cause of climate policy."

For real change to be affected, though, it will take more than conversation. It will take those ideas, Keohane says, from all corners of the economy, ideas that result in designed policies that provide economic incentives for individuals and companies.

Time Is of the Essence

A wrinkle: There may be little time to waste. In November 2018, a multi-agency government report that warned of the dangers of climate change included this line: "Without more significant global greenhouse gas mitigation and regional adaptation efforts, climate change is expected to cause substantial losses to infrastructure and property and impede the rate of economic growth over this century."

Yet President Donald Trump reacted this way: "One of the problems that a lot of people like myself, we have very high levels of intelligence, but we're not necessarily such believers."

That's the kind of thinking that those supporting a Green New Deal — the one just presented in Congress or any other versions of it — are still fighting. At least for the time being.

"I don't want to rule out anything in terms of how fast this could move, given the trends in public opinion, given the enthusiasm behind the Green New Deal, given the fact that we're starting to get bipartisan voices," Keohane says. "But if you look at an effort like this, to pass major new legislation, it often does take presidential leadership, and I don't think that's something we're seeing with this administration.

"I think that's where we need to be going, in terms of the national discussion ... what are going to be the priorities for the next president, whoever that is."

NOW THAT'S SCARY
The fourth National Climate Assessment, that sobering government report released in November 2018, has a wealth of information on our warming planet. One must-see highlight: an interactive chart of the "Indicators of Change," showing alarming moves in things like the Western U.S. snowpack (way down), an almost ninefold increase in U.S. ocean level in the past century and a tenfold increase over the past 10 years in acres lost to U.S. wildfires.

Windowless Airplanes: The Future of Flight? 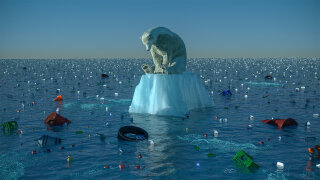 Study Says 2035 Is Climate Change Point of No Return 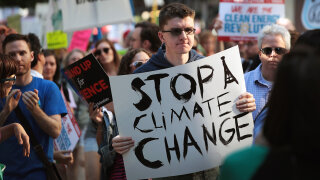 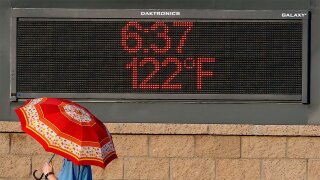 What's the Difference Between Sasquatch and Bigfoot?
April 9, 2020