Browse the article What does a lieutenant governor do? 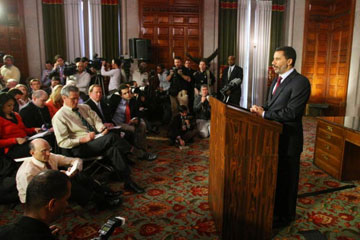 John Nance "Cactus Jack" Garner, who served as vice president under Franklin D. Roosevelt from 1933 to 1941, once dismissed the office of vice president as worth less than a pitcher of warm urine [source: Morrow]. One can only imagine what even more distasteful comparison Cactus Jack would have concocted for a job that's even lower on the political food chain -- the post of state lieutenant governor.

Lieutenant governor is a job that's held in such low regard that five states -- Arizona, Maine, New Hampshire, Oregon and Wyoming -- don't even bother having one [source: Hurst]. In Minnesota, the state legislature recently considered a proposal to eliminate the $78,000-a-year job, on the grounds that the lieutenant governor doesn't have enough to do to justify the salary. "There is one section in the state constitution that mentions the position, saying that the lieutenant governor is elected with the governor for purposes of succession," Hamline University law school professor David Schultz testified in a hearing. "But outside of that, what do they do? They wait for the governor to die, get sick or go on vacation" [source: Sundquist].

But perhaps that's not entirely fair. Standing in for the state's top executive is an important job. The nation's 45 lieutenant governors sit on university boards and head government commissions. Many of them constitutionally preside over their state senates, which allows them to wield influence over legislation and occasionally to cast important tie-breaking votes. When they're not doing that, they're posing for grip-and-grin photos at Boy Scout dinners and the like to enhance their name recognition with voters who may eventually elevate them to the top office. And let's face it, that's what they usually hope for.

In this article, we'll tell you more about what lieutenant governors do and why politicians clamor to be elected to the post. But first, let's take a look at how they get into office in the first place.

Unless they're appointed by a governor to fill in for a second-in-command who has died or resigned, lieutenant governors are usually elected into office by voters. In some states (Maryland is one example), they run on a ticket with the gubernatorial candidate of their political parties [source: State of Maryland]. In other states (California is one example), they're listed on the ballot separately [source: State of California]. When they're listed separately, it can lead to an awkward situation in which the governor and the lieutenant governor represent opposing parties, which, as you might imagine, doesn't do wonders for their ability to work together.

For example, in the late 1970s, Republican Mike Curb -- a music producer who penned the commercial jingle "You Meet the Nicest People on a Honda (Go Little Honda)" -- was elected second-in-command to liberal democratic Gov. Jerry Brown [source: Mikecurb.com]. While Brown was absent from the state for long stretches during an unsuccessful presidential run, Curb took his place and used his authority to appoint judges, which created a political mess for Brown [source: York].

In the next section, we'll look at what lieutenant governors do once they're in office.

Sometimes, lieutenant governors don't do anything. For example, in the early 1990s, former Maryland Lt. Gov. Mickey Steinberg had a falling out with his boss, Gov. Parris Glendening, over tax legislation. Since the Maryland constitution lets the governor choose his second-in-command's duties, Glendening simply ignored Steinberg for the next three years, giving him no assignments accept minor ceremonial ones [source: Timberg].

Other lieutenant governors take a relaxed approach to the job. In 2008, the Orlando Sentinel newspaper staff obtained Florida Lt. Gov. Jeff Kottkamp's schedule and discovered that over a 22-month period, there were 60 weekdays -- the equivalent of two months -- in which Kotthamp had had no appointments at all. During that time, the state also spent $425,000 on air flights for Kottkamp -- two-thirds of which were trips to Fort Myers, where he owned a vacation home. (Kottkamp insisted to the newspaper that his boss, Gov. Charlie Criss, actually had given him "lots of responsibilities," and that his travel was a sign of that) [source: O'Matz]. Still others choose to have some fun on the job. Back in 1974, former Delaware Lt. Gov. Gene Bookhammer once competed with fellow Republican politician Pete Du Pont in a contest to see who was faster at putting clothes on a female mannequin. Bookhammer reportedly lost [source: Cohen].

Kidding aside, the lieutenant governor obviously isn't always just a stand-in or a ceremonial figure. In 30 states -- Mississippi, Washington, North Carolina, and Texas, among others -- the lieutenant governor also doubles as the presiding officer of the state senate. Many of them have the power to set rules and control the direction of debates, to determine which committees consider legislation and even to determine the order in which bills are considered. Several even have to power to pick which senators sit on various committees or chair them.

In the 1940s, when future U.S. Supreme Court chief justice Earl Warren was governor of California, he reportedly disliked his second-in-command Goodwin Knight so much that when he went on trips, he locked up legislation in his desk so that Knight couldn't sign it [source: Capital Public Radio].

When San Francisco mayor Gavin Newsom was running for the Democratic nomination for governor of California in 2009, he derided the lieutenant governor's office as a "largely ceremonial post." But a year later, after the race for governor proved too competitive and costly, he abruptly changed his attitude and threw his hat in the ring. Newsom's somewhat improbable explanation was this: He hadn't previously appreciated the importance of the lieutenant governor's side duties, such as heading the California economic development commission and serving as a University of California regent [source: Rothfeld].

Politicians often swallow their pride and seek the lieutenant governor position because of one simple fact: It gives them name recognition that will help them if they eventually run for governor. A study by the National Lieutenant Governors Association found that between 1980 and 2006, 56 lieutenant governors went on to become the governors of their states, compared to 53 state senators, 28 U.S. Congress members, 24 attorney generals and 19 mayors. The lieutenant governors were outnumbered only by the 96 state house members who ascended to the top post. Because there are a multitude of legislators but only one lieutenant governor for each state, it works out that the second-in-command has about a one in four chance of eventually getting the top guy's job. Meanwhile, a state assembly member or representative has only a one in 100 shot [source: NLGA].