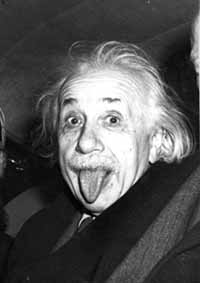 Geniuses like Einstein are also known for their creativity and productivity -- and sometimes for their quirky behavior.
Image courtesy © 2006 SmugMug, Inc.

There's a big difference between being really smart and being a genius. While geniuses tend to be exceptionally intelligent, they also use imagination and creativity to invent, discover or create something new within their field of interest. They break new ground rather than simply remembering or reciting existing information.

Geniuses do not usually operate in isolation, either -- nearly all of them analyze the work of other great minds and use that information to make new discoveries. Self-taught geniuses, on the other hand, often explore information in unexpected or inventive ways, due in part to their lack of formal training. In either case, the ability to imagine new possibilities is as important as general intelligence.

Like intelligence, creativity and imagination can be difficult to isolate, quantify or explain. Some researchers believe that creative people have less latent inhibition than other people. Latent inhibition is the unconscious ability to ignore unimportant stimuli. Researchers theorize that creative people either receive more stimuli from the world around them or ignore less of it. This may also explain why creative people seem to be more prone to mental illness. People who are both unable to filter stimuli and emotionally unstable are more prone to psychosis.

The creativity of geniuses also relates to productivity and hard work. Sometimes, the most dramatic examples of genius involve people who produce their best work at a very young age. However, not every genius produces exceptional work early in life the way Einstein and Mozart did. Some, like Ludwig von Beethoven, do their best work later in life.