Geekdom Is on the Rise

A few years ago, something strange happened: Geek went mainstream. While geeky movies have been popular for decades, the recent rush of television shows and film series inspired by traditionally geeky subjects like comic books, science fiction and fantasy has turned what used to be a niche audience into a global one.

The process hasn't always been a smooth one. Some fan communities resent when a formerly obscure property finds new popularity. And not all media depictions of geek culture are positive — there can still be a mean-spirited perspective masquerading as a celebration of all things geek.

But what is a geek, anyway? Emma Loggins, founder of fan site FanBolt, says a geek is someone who has incredible passion for something. She maintains you can be a geek about anything. If you're passionate about sports, you're a sports geek. Are you obsessed with cooking? You're a food geek.

Before the Internet, feeling isolated often went hand in hand with being a geek. Your circle of friends and family might not have shared your interests. But today online communities give fans more opportunities to get together and have in-depth discussions about their favorite subjects. At the same time, film and television studios are creating more entertainment aimed at geeky populations. What was once a negative term that carried the concept of loneliness has become a badge of honor for people around the world.

While we were at South by Southwest, we spoke to Emma Loggins and Farrago Comics co-founder Martin Fleischmann. Watch the video above to see what they have to say about geek culture today.

Climate Change Is Affecting French Wines — For Good and Bad

Anyone Can Make Vladimir Putin Smile 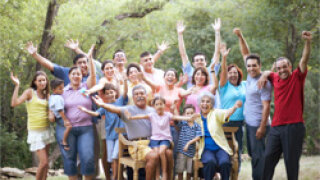 Comic Books Are More Than Just White Guys in Tights

Don't Just Watch the Debates. Pretend You're in Them