The (Gay-Parented) Kids Are All Right 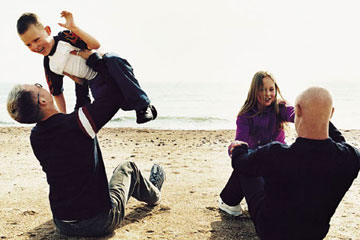 The key to good parenting is love and resource investment.
David Ellis/Getty Images

Academic entities aren't the only assessors that have, a majority of the time, found no harm to children posed by gay parenting. Notable organizations have also concurred with the positive gay parenting findings, among them the American Academy of Pediatrics (AAP). In a February 2002 article in the journal Pediatrics, the AAP stated concisely that "a growing body of scientific literature demonstrates that children who grow up with one or two gay and/or lesbian parents fare as well in emotional, cognitive, social and sexual functioning as do children whose parents are heterosexual" [source: Perrin]. Likewise, the Child Welfare League of America, American Psychological Association and American Psychiatric Association have publicized similar stances [source: Hulbert].

But what about the common assumption that same-sex parenting inherently predisposes children to becoming homosexual themselves? In short, research doesn't support that notion. According to the American Psychological Association, most children raised by lesbian moms and gay dads ultimately identify as heterosexual [source: American Psychological Association]. And by virtue of having homosexual parents, those children tend to hold broader views of gender roles and expectations, which could serve them well when they start families of their own [source: Belkin].

In fact, taking the breadth of child development research into consideration, the primary downside boys and girls brought up in same-sex households might face isn't lackluster parenting, abnormal psychologies or maladjusted social skills. Rather, due to the lingering sour stigma and limited acceptance of gay parenting, the primary foe kids of gay parents may face is bullying. By one estimate, 41 percent of 10-year-old children with gay parents encountered bullying or isolation related to their domestic dynamics [source: Park]. But follow-ups with the same kids at age 17 revealed no long-term negative psychological impact, and they had, on average, just as many friends as their peers.

The gold standard of parenting is two people with a healthy relationship who want to raise successful kids, and when that can't be achieved, a single committed parent can fulfill that mission as well. Myriad variables can determine children's futures, down to when they're born, and research has thus far silenced parental sexual orientation as a make-or-break dice roll. From all of the statistics and regression analyses, a simple message emerges: Good parenting revolves around resource investment -- a lifetime of love.

Anytime I'm assigned to write about a hot-button issue like same-sex parenting, it's a welcome fact-finding mission. Although my podcast, Stuff Mom Never Told You, and its accompanying blog leaves more room for editorializing, remaining neutral is a cornerstone ethic of HowStuffWorks.com, and this article on How Gay Parenting Works was no exception for me.

Back in 2010, I interviewed social scientist Judith Stacey who had just published a landmark study comparing same-sex parenting and heterosexual parenting and concluded that gender and sexual orientation didn't make a difference in children's successful developments. Digging deeper into Stacey's research for this article, I found an earlier article she published mildly chastising researchers like herself for not being rigorous enough with examining gay parenting data, because of an underlying desire to dispel homophobia with empirical data. Likewise, as I mention in the introduction to this article, subjective views on homosexuality and gay parenting likely can't be arm wrestled into submission with scholarly publications. My aim, in that case, was to allow the percentages and facts to speak clearly and loudly for themselves.