Same-sex Parenting and the Law 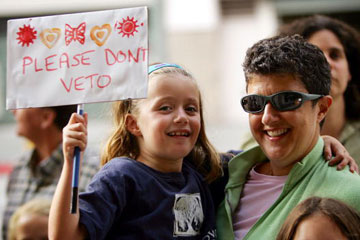 In some situations, children may enter into the picture before same-sex partners get together. In fact, according to the 2010 American Community Survey, 72.8 percent of gay couples in the United States were raising biological children of one or both partners who may have been the products of previous heterosexual relationships or artificial or donor insemination [source: American Community Survey Briefs]. If a same-sex couple wishes to share custody of biological or adoptive children, getting married often won't do the trick, since -- as of March 2012 -- only six U.S. states and Washington, D.C., permit same-sex marriage [source: American Civil Liberties Union]. In those cases, the next feasible option would likely be second-parent adoption, which was established in the 1980s.

Second-parent adoption allows two unmarried people to equally share child custody rights; but as with marriage, same-sex couples may quickly encounter roadblocks depending on their geography. Those adoptive statutes are outlined by individual states, some of which are more punitive toward gay parents than others. Until 2010 in Florida, for example, a state statute strictly banned homosexuals from adopting children under any circumstances [source: Cooper]. And when a gay parent is barred from adopting his or her child, as per the former blanket rule in Florida, vital benefits are immediately endangered by virtue of them being legally unrelated, including the following [source: Rogers]:

Since heterosexual married couples are afforded those federal and state rights when they say "I do," in many ways, gay marriage is tantamount to the right to same-sex parenting. For that reason, some gay rights activists are motivated to legalize same-sex marriage not so much for the protection of their partnerships, but for their present or hoped-for sons and daughters [source: Rogers]. Joint child custody also mitigates the risk of a legal battle should a couple split up. In a lesbian couple that has a baby via donor insemination, for instance, the birth mother automatically is granted custody -- but not her partner. If they part ways, it might be up to a judge to decide whether the non-birth mom gets to see her son or daughter.

Meanwhile, child welfare groups also have increasingly supported gay adoption rights (for non-biological children) as a much-needed avenue to service the vast numbers of American kids in foster care and adoption agencies. Despite strong opposition from some Catholic adoption services, about 2 percent of gay couples had adopted children as of 2007, and that number may have swelled to as high as 21 percent by 2010 [sources: Padgett, American Community Survey Briefs]. Nevertheless, when same-sex couples wish to adopt a non-biological child, full custody will typically be granted to only one partner, unless they can legally marry or the state permits joint custody to same-sex couples, which exists in only seven states as of 2011 [source: American Civil Liberties Union].

Because of these legal hoops many homosexual couples must jump through in order to become parents, psychologists classify their children as "highly desired," which is directly correlated to their positive mental and social adjustment in the long term. But that doesn't mean that kids of same-sex couples don't encounter bullying and negative stereotypes along the way, either.