Defining the Limits of Protection 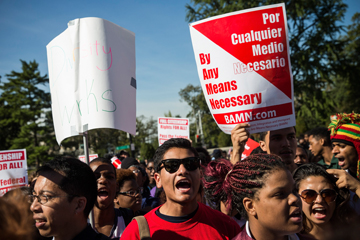 Students protest in support of affirmative action outside the U.S. Supreme Court. The right to speak freely is enshrined in the U.S. Constitution's Bill of Rights.
Andrew Burton/Getty Images

In 1972, Marvin Miller, who ran an adult-books business, mailed product brochures to homes at random. A mother whose child saw the adult-themed catalog called the police, and Miller was arrested for violating a California statute prohibiting distribution of "obscene" material. Miller appealed, claiming the statute violated his right to free speech [source: Laws.com].

Historically, the Supreme Court has resisted defining expressions as obscene, lest it fall into the role of legislating morality [source: Illinois First Amendment Center]. Yet in Miller v. California, the 1973 Supreme Court found that Miller's speech did not qualify for protection, not necessarily because it was obscene, but because states had the right to regulate the distribution of pornography, and because Miller's speech exposed a protected class of people, children, to inappropriate content [source: Laws.com]. (The case was a landmark one because it also specified a new, three-prong test for defining what is and is not obscene.)

On the other hand, in 2004, the Supreme Court found for the pornographers. Ashcroft v. the American Civil Liberties Union addressed the Child Online Protection Act, which required pornography publishers to restrict underage access. The court found the act to be unconstitutional on several grounds. First, it was not specific enough in its definition of inappropriate material, lending the government too much discretion in judging content; and its infringement on free speech went beyond what was necessary, since other approaches, like parental controls, could accomplish the goal of protecting children without limiting anyone's liberty [source: Oyez Project].

Digital communication has triggered a new generation of free-speech questions. The 2013 case, Bland v. Roberts, that extended speech to include clicking a Facebook "like" button involved two men who worked for a sheriff running for office; they were fired for liking (and commenting) on his opponent's Facebook page. They appealed their case on First Amendment grounds and won [source: Kelly]. In 2010, the Supreme Court determined that online videos depicting animal cruelty are protected as free speech, even though the acts themselves are against the law [source: Vicini].

That the "expression" of an illegal act may itself be legal underscores the complexities faced by the court in determining the limits of free speech.