Browse the article What is a flash mob? 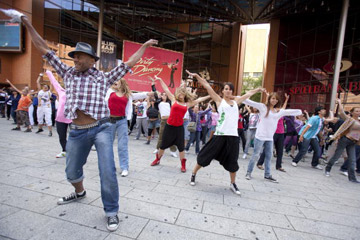 These days, flash mobs spring up for all sorts of occasions. This group, for example, is performing "Thriller" in honor of Michael Jackson.
Stringer/Entertainment/Getty Images

For some of us, joining in with a crowd of strangers to dance in sync to a Lady Gaga song is relegated to our biweekly Jazzercise class. And while many of us are happy to keep our spastic limbs private, flash mobs -- groups of people who gather spontaneously in a public space and perform a coordinated dance or action -- thrill unwitting onlookers with their efforts.

Of course, the meet-up and the performances are entirely coordinated and often rehearsed. It's hard to believe that an activity that so clearly separates those "in the know" from the clueless public was actually invented to make fun of hipsters.

We'll explore here how large groups of people descending upon bewildered onlookers could be seen as sticking it to our "scenester" friends, and we'll also tackle how this 21-century pastime has morphed into entertainment, protest, education and -- where all hipster trends go to die -- advertising.

Bill Wasik, an editor at Harper's magazine and the "inventor" of the flash mob, simply called his project, which he began in May 2003, "MOB." (The term "flash mob" was coined after the fact, by a blogger.) Wasik e-mailed the instructions for the first meet-up from an anonymous account, sending it to what he calls a "fairly representative cross section of hipsters" [source: Wasik].

Why, exactly, would Wasik do such a thing? In his words, "seeing how all culture in New York was demonstrably commingled with scenesterism … it should theoretically be possible to create an art project consisting of pure scene -- meaning the scene would be the entire point of the work, and indeed would itself constitute the work." In other words, would hipsters just show up because hipsters were showing up? [source: Wasik].

The first successful flash mob took place in June 2003, when two hundred people flooded a Macy's in Manhattan and asked the salespeople for help finding a "love rug" for their commune, only to disperse quickly after ten minutes.

But while Wasik's winking invention proved his point, next we'll check out ways that flash mobs have gone from making fun of pop culture to mirroring it.

A Flash Mob for Every Reason

While mocking hipsters is always fun, as the popularity of flash mobs grew they started to become a scene that cheerfully celebrated popular culture in its cheesiest glory.

And while the mobs may be fleeting, the preparation required for hordes of synchronized activity is not. A flash mob at Ohio State University, for instance, had two and a half months of weekly practice to organize about seventy students and staff for their dance to Journey's "Don't Stop Believin'." Mob organizers usually have a few rehearsals, or have an instructional video online for participants to practice with.

When the first flash mobs were started, directions were disseminated through email. Slips of paper would be handed out at the location for more specific instructions. Of course, as technology evolved, instructions for flash mobs were given on Facebook, through Twitter, and texts. Now, a simple web search of "flash mobs" in your city will lead to slick companies that organize flash mobs, with professional pedigree. E-mail lists will alert you to meet-ups in your area.

The practice has become so popular that flash mobs have been co-opted by elements even seedier than hipsters and politicians. There have been several reports across the country of groups organizing robberies through flash mob-like means. Using Twitter or other social media, a crowd of people will flood a store to essentially loot its contents in what has been coined a "flash rob."

By and large, of course, flash mobs are about as dangerous as joining a community theater production of "Pippin." But let's all meet up at the next page to discover some other flash mob history and uses.

In 2011, AT&T debuted a television commercial that used a flash mob scene to demonstrate how slow cell phone service can totally ruin a perfectly good flash mob. While no doubt there were some clueless older viewers asking their children why that grown man was doing jazz hands in the train station, it appeared that the ultimate "insider" scene had now transformed into just another advertising tool [source: NRPA].

Carried to the Mob

Before flash mobs became a fashionable way to confuse tourists, the earliest meet-ups spread through technology were used as political tools. The Philippines and Spain had already seen protests form through text message and cell phone; the 1999 World Trade Organization riots in Seattle were mobilized through cell phone contact.

More recently, the world was introduced to flash mobs that were (literally) revolutionary. In 2010, an Egyptian flash mob was organized through Facebook to protest the killing of a young man by Alexandrian police. The "Silent Protest" was simple. Participants lined up and faced the ocean in silence, before marching away single file.

This protest in many ways foreshadowed the events of early 2011, when Egyptians formed spontaneous protests through social media that eventually led to the resignation of then-president Hosni Mubarak.

Mobs with a politically-oriented bent were also seen in the United States. In the early days of flash mobs, Garry Trudeau wrote an invite into a September 2003 "Doonesbury" comic. The mob wasn't just a fun way to capitalize on a trend: it also served to advertise a meet up to support then-presidential candidate Howard Dean.

While "flash mobs" generally refer to the spontaneous gatherings started in 2003 by Bill Wasik, there are other groups -- such as Improv Everywhere -- that create flash mob-type scenes. Although Improv Everywhere's 2001 founding actually predates Wasik's flash mobs, their scenes are a bit different. Instead of quick, choreographed meet-ups, their scenes are more like public pranks (a subway inexplicably filled with pantless commuters, a Best Buy filled with non-employees wearing the uniforms of the staff). Their "missions" are also only occasionally open to all volunteers, and Improv Everywhere regulars usually execute the missions.

So while flash mobs were invented to snidely acknowledge hipster know-it-all, it was only a matter of time before they were corralled into mainstream culture to do what American culture does best: sell crap. Spaces now hire firms to set up flash mobs to generate interest in a new mall or shopping center, and even the National Recreation and Parks Association is sponsoring a contest to judge the flash mob that will best bring "people together in the place or space."

If you're interested in joining, watching, or mocking flash mobs -- or other scenes of public culture -- check out the next page for more information and links.