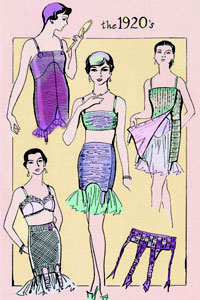 Flappers changed fashion from the inside out.
Getty Images

Glamorous Zelda Fitzgerald and her sensational flapper contemporaries left behind a legacy of style. Whereas the Victorian silhouette exaggerated the feminine hourglass shape, flapper fashion swung the other way by glorifying the boyish figure. With French designer Coco Chanel leading the way, waistlines relaxed and dropped, and corsets became a bygone wardrobe relic. Looser lingerie called step-ins replaced tight-laced corsetry, and minimizing brassieres kept curves under wraps [source: Gourley]. Sack-like shift dresses became the flapper uniform, and the simplistic design allowed women of all socioeconomic rungs to make their own and remain on-trend. Flappers literally walked around lighter than Victorian era woman, considering, for example, that the average flapper dress consisted of around 7 yards of fabric, compared to 20 yards for a Victorian gown [source: Gourley].

Despite the popular notion that flapper hemlines quickly rose above knee-level and stayed there throughout the 20s, that’s revisionist fashion history. In actuality, the typical flapper shift dropped down to mid-calf, and only inched up above the knee from 1926 to 1928 [source: Thomas]. Those three years represented the climax of flapper fashion, with brave women sporting shorter dresses to better accommodate animated dance styles, including the Charleston, Fox Trot and Black Bottom. In additional to bared ankles and calves, flappers also put their bare arms on display, often dressing up naked wrists with multiple bracelets. Long strands of pearls or pendant necklaces accentuated the long, straight lines of Art Deco-influenced flapper shifts [source: Jailer-Chamberlain]. And while these dresses were easier for lower and middle class women to whip up at home, wealthier flappers nevertheless stood out with finer silks, georgette and lamé, as well as lavish beading and embroidery bedazzling their finery.

The Jazz Age was also the era when women traded in their black woolen stockings for sheerer hosiery. Many flappers also rolled down their hosiery, resembling makeshift knee-highs. And rather than boring black hosiery, flappers sprang for patterns and pastels, transforming hosiery into a fashion accessory rather than a mere undergarment [source: Jailer-Chamberlain]. T-strap and buckled heels -- not too high to prevent dancing, however -- were the preferred footwear.

The tightest item a flapper would probably step out of the house in would be her must-have cloche hat. The slight brim of these close-fitting hats covered the forehead, and the shape advertised the flapper's close-cropped hairdo. Indeed, flappers had no desire for long tresses and soft Gibson Girl up-dos. In yet another rebellion against their Victorian foremothers, flappers copied their silver screen idols like Louise Brooks and chopped their coifs into bobs. The especially short Eaton crop was all the rage, and women would also apply pomade to their hair to slick it even closer their scalp [source: Gourley].

But the American economy went south much faster than it took to grow out those brash bobs. The stock market crash on October 29, 1929, suddenly silenced the celebratory roar of the '20s. Financial collapse also signaled the end of the flapper era, as Americans faced widespread unemployment and poverty. Nevertheless, the legacy of those brazen, rule-breaking flappers remains one of the most iconic chapters in women's and fashion history.