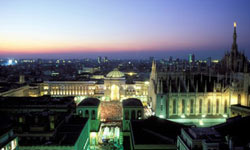 Thieves made off with millions of dollars worth of diamonds, rubies and gold from the Damiani showroom in Milan.
Vincenzo Lombardo/Taxi/Getty Images

Where: The Damiani showroom in Milan, Italy

How much: Approximately $20 million

This next one begins with a woman in Milan complaining to police at least once about early-morning noise in her neighborhood. Because there was a construction project going on nearby, nothing came from her complaints; the police (and everyone else) figured that the noise was coming from the workmen. No one considered that the woman lived practically next door to the world-famous Damiani jewelry showroom.

Damiani's building was secure, with a high-tech alarm system and an armed guard at the front door. None of that really mattered, though, since the thieves had been drilling a hole every morning through the 4-foot (1.2-meter) wall that separated the showroom basement from the basement next door.

Their timing was almost perfect. The store had been preparing for a private showing, so there were no customers in the showroom -- just staff members who could open the vault. The thieves wore fake or stolen police uniforms and popped up in the showroom through an inner, unguarded entrance, at 10 a.m. Unarmed, and apparently relying on surprise and disguise, they asked to see certain store records and then pounced, tying and gagging the staff. They temporarily untied one employee to open the safe. The operation took about a half hour, netting about $20 million in diamonds, rubies and gold [source: NY Post].

So what was the only flaw in such a grand heist? The thieves would have made off with much more had it not been Oscar time. Some of the most valuable pieces were out on loan to Hollywood's stars, including Oscar winner Tilda Swinton, who wore Damiani's "Sahara Bracelet," bearing 1,865 diamonds totaling more than 47 carats [source: Reuters]. The investigation is ongoing. Police suspect an inside job -- the timing was just too perfect.