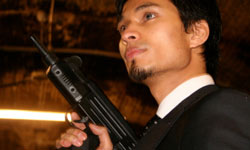 In this snatch-and-grab, the robbers entered their target establishment firing off machine guns. Fortunately, the guns were only firing blanks, and no one was hurt.
©iStockphoto.com/George Cairns

How much: Approximately $60 million

The Carlton Hotel is a luxurious place. It's so fancy, in fact, that it has its own jewelry shop. And in 1994, that shop became the target of one of the biggest gem heists ever.

This robbery relied less on elaborate schemes and more on brute force and fear. At the shop's closing time, three masked men breezed into the store and began spraying machine gun fire.

Understandably, customers and employees panicked, and as people fled or huddled in terror, the men swept jewels into bags and made their escape with a haul valued at roughly $60 million. They were never apprehended, and the jewels were never recovered.

Yet, as police investigated the crime scene, they quickly realized one important detail -- there were no bullet holes in the walls or ceilings. The robbers had been firing blanks.