Browse the article How a Filibuster Works 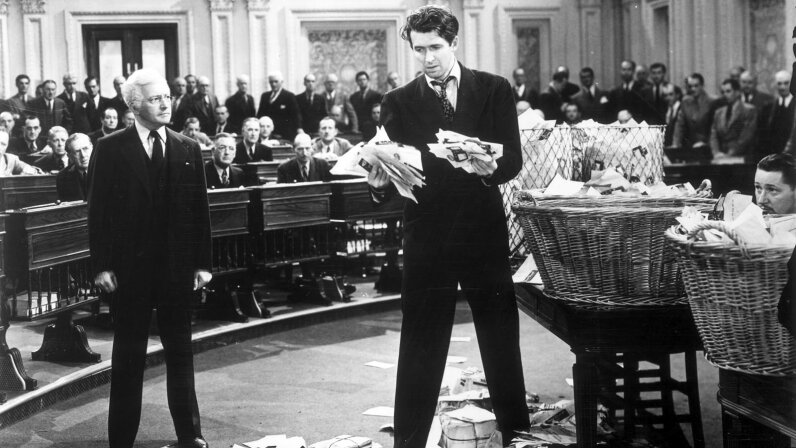 If you've ever seen the classic movie "Mr. Smith Goes to Washington," you'll remember that James Stewart plays a senator conducting a filibuster to stop a corrupt public works bill. Talking until he becomes physically exhausted, Smith uses the filibuster tactic to uphold his principles [source: Dirks]. In real life, Senate filibusters occur for a variety of reasons, not all of them so high-minded.

A filibuster is any use of procedural rules to block or delay legislative action. The term usually refers to extended debate of a bill carried on by one or more senators. The continual talking prevents the matter from ever being voted on, and the bill may simply be "talked to death." Other delaying tactics can be used for the same purpose.

Filibustering goes all the way back to the Senate of ancient Rome. Legislatures in the United Kingdom, Canada, Australia and France have used filibusters [sources: Connolly]. But the U.S. Senate has endured many more than other bodies. In part, this is because today, a senator doesn't have to speak endlessly in order to filibuster. If he or she has more than 40 senators on their side, the mere threat of a filibuster effectively blocks legislation. No endless debate is needed.

Some regard the filibuster as a tactic that preserves the rights of the minority and assures careful consideration of issues. Certainly it can foster accommodation. The majority party might seek to shape a bill so that a substantial minority of senators will not block it with a filibuster.

But others criticize the filibuster as intrinsically undemocratic. They think it allows the minority party to dictate to the majority. An actual extended debate wastes time needed for other matters, too. And the compromises that senators make to avoid a filibuster may be bad ones aimed at placating a single senator.

So what's the history behind the filibuster? It's long and colorful. We'll talk about that next. 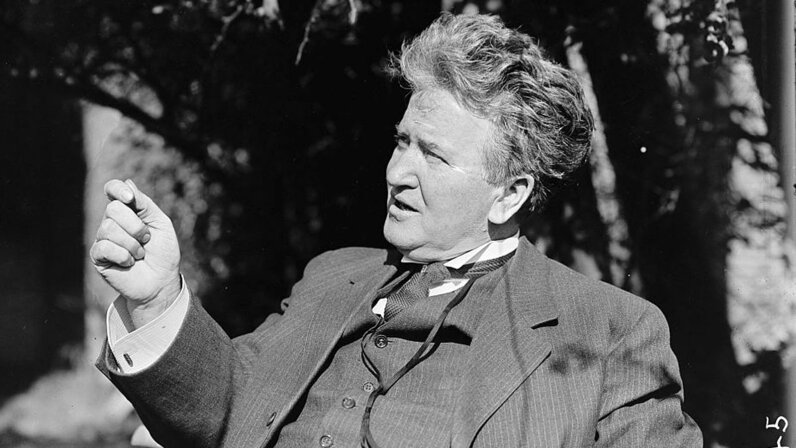 In 1917, progressive Sen. Robert LaFollette led a filibuster to block a bill that would arm U.S. merchant ships. Library of Congress

The filibuster in the U.S. Senate evolved accidentally. It's not mentioned in the U.S. Constitution, nor is it part of our system of checks and balances. No Senate rules specifically mention filibusters.

When the House of Representatives and the Senate were established in 1789, they had similar rules for cutting off debate on a bill or any other matter. Only a majority vote was needed to pass a "previous question motion" [source: New York Times]. Once that motion passed, debate on the bill ended and senators voted whether to enact the bill into law.

In 1806, senators simplified their rules, eliminating the little-used "previous question motion" rule, which limited debate [source: Connolly]. They didn't realize that they had made it possible for one or more senators to carry on an endless debate that could keep bills that the majority wanted to pass from coming to a vote. (The House, on the other hand, retained the ability to cut off debate by a simple majority vote. Filibusters are not possible in that body.)

But during the 19th century, the filibuster was an uncommon tactic in the Senate. The first filibusters didn't occur until the 1830s [source: Connolly]. Fewer than two dozen took place before 1900. The Senate had a tradition of reasoned debate, and most senators frowned on any abuse of rules.

In 1917, a group of senators led by Wisconsin progressive Robert LaFollette conducted a filibuster to block a bill that would arm U.S. merchant ships. Frustrated by the 23-day delay as the Great War raged in Europe, President Woodrow Wilson enlisted public opinion against "a little group of willful men" [source: Carlson]. Wilson pushed the Senate to pass what was known as the cloture rule.

During the 20th century, Southern senators often used filibusters to block civil rights legislation. From 1922 to 1949, they were able to block five separate anti-lynching laws. In 1957, South Carolina Sen. Strom Thurmond spoke in the Senate for 24 hours, 18 minutes in an unsuccessful attempt to prevent a vote on a civil rights bill. That stands as the record for a one-man filibuster [source: Carlson].

In 1975, senators changed the cloture rule to require only a three-fifths vote (60 rather than 67 senators) to cut off debate. New procedures also allowed senators who could muster at least 41 votes to delay a particular piece of legislation while the Senate proceeded with other business. They didn't need to conduct an actual filibuster, only threaten one. Intended to make the Senate more efficient, this change actually increased the frequency of filibusters [source: Schlesinger]. The cloture rule, also known as Rule 22, is the only formal procedure that senators can use to break a filibuster.

The word filibuster is related to the Dutch word "vrijbuiter" meaning "pirate" [source: Zimmer]. It once referred to American adventurers who encouraged revolutions in Central and South America. It may have acquired its current meaning because pirates took hostages for ransom; filibusters hold senators hostage. 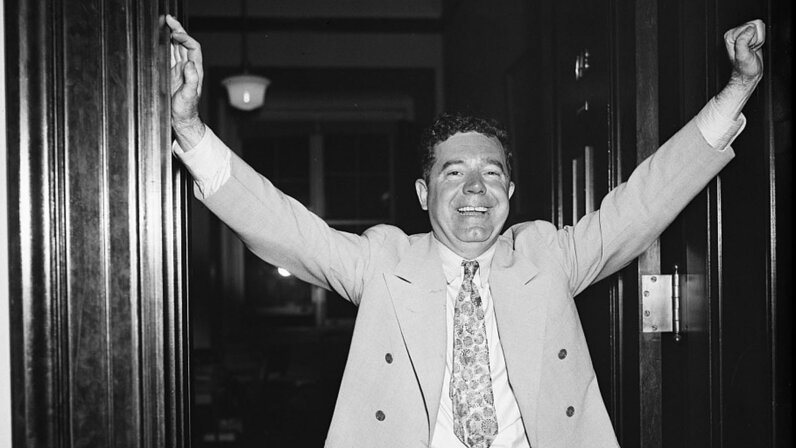 In 1935, Sen. Huey Long of Louisiana conducted a 15-hour long filibuster to force the Senate's Democratic leadership to retain a provision requiring Senate confirmation for the National Recovery Administration's senior employees. Here Long is seen as he left the floor of the Senate. Library of Congress

In a simple filibuster, like the one in "Mr. Smith Goes to Washington," a single senator holds the floor, talking for as long as he or she can. Many such one-person filibusters have been held over relatively minor issues or to score political points.

In 1935, Louisiana Sen. Huey P. Long staged a filibuster to try to hang on to patronage jobs in his state. He spoke nonstop for 15 hours, filling the time by reading from the Constitution and from the plays of Shakespeare. He even gave recipes for cooking fried oysters. No rule says a senator's speech has to be relevant to the matter at hand.

If only a single senator filibusters, their colleagues can hold a successful cloture vote as soon as they yield the floor, ending the filibuster. But if more than 40 senators support a filibuster, cloture is impossible and the matter can be delayed indefinitely.

For example, a group of senators talked for 57 days to try to block the Civil Rights Act of 1964. In the end, some senators were won over, a cloture vote succeeded and the bill was enacted [source: Carlson].

Extended debate is only one technique for delaying legislative action. Others include:

If you think these delaying tactics could seriously interfere with the Senate's business, you're right. In recent years, filibusters have themselves generated a good deal of debate.

Read on to learn about efforts to reform the rules governing filibusters.

To conduct a one-man filibuster, a senator must remain on the Senate floor continuously and talk nonstop. Bodily functions present a distinct problem. The late Sen. Strom Thurmond took a steam bath before his record-setting 1957 filibuster in order to dehydrate himself, reducing his need to use the bathroom [source: Carlson]. But the call of nature has brought many filibusters to an end. 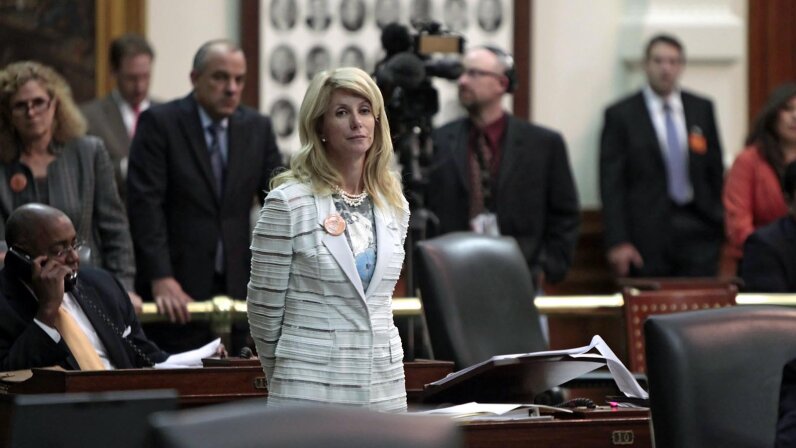 Until recent decades, filibusters were rare. During the 1950s, the Senate averaged fewer than one filibuster per session. But in the 21st century, the pace has increased dramatically. In the 116th Congress (2019-2020), cloture was invoked, stopping the threat of a filibuster, 270 times [source: senate.gov]. Both parties have filibustered when in the minority. Many feel that reform of the rules that allow filibusters is overdue.

But senators have always been reluctant to give up the power that the filibuster affords them. Plus, reformers face a major obstacle: A rule change usually requires a two-thirds vote to pass — and that can of course itself be filibustered.

In late 2010, senators discussed filibuster reform. A number of provisions were put forth. One would have returned to the requirement that senators remain on the floor while filibustering. They could no longer block a bill by just threatening a filibuster. Another would have gradually reduced the threshold for cloture as a debate proceeded until a simple majority could end debate. A third would have banned filibusters on motions to bring a bill to the floor.

But for the most part, all other proposals failed. Instead, a handshake agreement between party leaders was put in place of limited reforms. The use of filibustering to prevent bills from being introduced was restricted. Majority Democrats agreed to allow the minority to introduce more amendments to bills. Both sides agreed not to exercise the "nuclear option," changing filibuster rules by a simple majority vote.

Some progress has been made. The cloture rule allows some filibusters to be stopped. The budget reconciliation process is another way of getting around a filibuster. According to Senate rules, bills dealing with budget matters can be protected against a filibuster. Reconciliation was used to pass the Tax Cut and Jobs Act under President Donald Trump in 2017 [source: Manetto].

In 2021, debate is again raging. With the new Senate split along party lines, 50-50, Democrats barely control the chamber, with Vice President Kamala Harris as president of the Senate, holding a potential tie-breaking vote. In order to pass what they see as vital legislation, some progressives are again calling for the "nuclear option." But President Joe Biden, who was a senator from Delaware for nearly four decades before serving as vice president from 2009-2017, is balking at eliminating the longstanding rule [source: Herndon, Lerer].

When in the majority, senators from both parties have threatened to limit filibustering by allowing rules to be changed by a majority vote once every session. Known dramatically as the nuclear option, it was first used in 2013 when then-Democrat Majority Leader Harry Reid invoked it to lower the 60-vote requirement to 51 for approving executive branch appointees and federal judges.