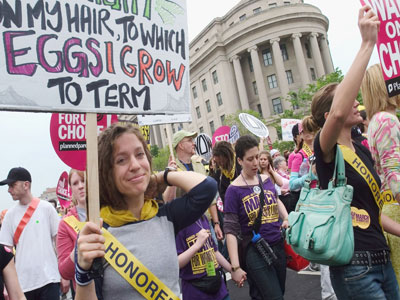 While second-wave feminism operated through coalition building and mass activism, third-wave feminism emphasized individualism. The early '90s concept of power feminism urged women to embrace their sexuality and reclaim femininity in a positive light. Developed from works including Camille Paglia's "Sexual Personae," which posited that men's obsession with female sexuality rendered them the weaker sex, power feminism contrasted the second-wave perspective of women as victims of patriarchy.

In addition, third-wave feminism tackled body image, transgender sexuality and sweatshop labor along with reproductive freedom and workplace equality. Meanwhile, due in part to a conservative backlash, the stereotype of feminism as militant man-hatred had solidified in the cultural mindset. The label became burdened with a litany of political and social agendas that alienated more conservative females who otherwise believe in gender equality. Furthermore, polls have shown that younger generations of women shy away from labels in general -- especially feminist ones [source: Traister].

In 2005, Lisa Jervis, editor of Bitch magazine, wrote that third-wave feminism had reached the end of its usefulness because it conjures cultural associations rather than core values that many people share, whether self-described feminists or not [source: Jervis]. That same year, The New York Times reported that more Ivy League females planned to become at-home mothers after graduation [source: Story]. Then, in 2008, the National Center for Health Statistics announced the first decline in the age of women having children in nearly 40 years [source: Shellenbarger].

­By the same token, today's generation of women obviously hasn't rejected the benefits won by past feminists -- they attend college and enter the workforce in larger numbers than their predecessors. Whatever women choose, the most salient aspect is having the freedom to decide. After all, the core of feminism is equality, not proscription. Sure, all the road blocks haven't disappeared, but thanks to countless women's -- and men's -- efforts, the path is far easier to tread.