Browse the article How FEMA Works 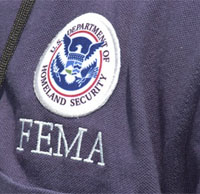 The Federal Emergency Management Agency (FEMA) has been around since 1979. Although much of FEMA's recent press has been negative, the agency has been a powerful force in helping Americans prepare for, deal with, and recover from some of the worst disasters in history. From hurricanes and earthquakes to nuclear power plant meltdowns and toxic contamination, FEMA has been there to assist people in uncertain situations.

In this article, we'll find out what FEMA does, how it operates and how it has changed. We'll also review FEMA's response to Hurricane Katrina and other disasters.

Since the publishing of this article, the United States Senate has voted to overhaul U.S. emergency management.

In a vote of 87-11, the Senate wishes to eliminate FEMA and create a new emergency management agency to be named the "."

The new agency will operate independently within the Department of Homeland Security. With the change will come two important increases: more personnel and more authority. And possibly even more important -- during times of crisis, the agency will be granted a direct line to the president. 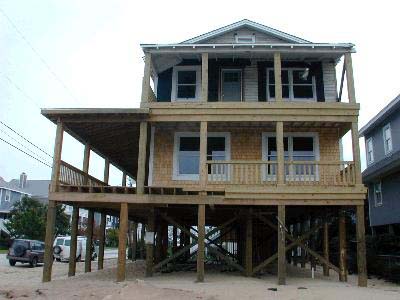 ­Prior to 1979, disaster management in the United States was a patchwork of on-the-spot legislation, local, state and federal agencies and volunteer groups. The U.S. Army Corps of Engineers controlled some aspects of disaster mitigation, while different government agencies provided insurance for disaster damage. Eventually, more than 100 agencies existed to deal with disasters, and many of them needlessly duplicated the efforts of others.

­President Jimmy Carter created FEMA by executive order in 1979, and the new agency absorbed many other agencies. FEMA took on a wide range of responsibilities that included natural disasters and civil defense plans in case of war. In 2003, FEMA became part of the Department of Homeland Security.

FEMA is tasked with handling all possible disasters. This includes both natural disasters, such as hurricanes and earthquakes, and man-made ones, such as hazardous substance spills, bombings and war. Although most people associate FEMA with disaster response, the agency has put a great deal of effort into disaster preparation. These preparations include hurricane-proofing homes and helping cities retrofit buildings to make them safer in the event of an earthquake. The 2001 Nisqually earthquake in Washington State could have caused far greater destruction if buildings in the area hadn't been retrofitted through FEMA's Project Impact.

FEMA provides information to home and business owners that can help them take steps to prepare for disasters. A comprehensive list of FEMA advice on disaster preparation can be found here. The list includes winter driving tips, ways to upgrade and improve homes to keep storm and earthquake damage to a minimum, and grant programs that can help people pay for upgrades.

During the Cold War, much of FEMA's effort went into preparing for a nuclear attack. Today, terrorism damage mitigation is a key part of FEMA's duties.

In the next section, we'll find out how FEMA helps when disaster strikes. 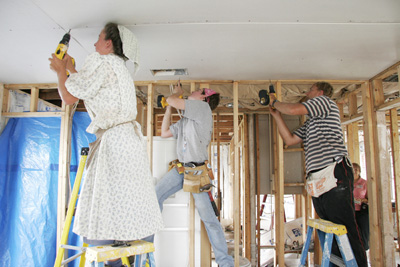 In the aftermath of a disaster, people are left with damaged or destroyed homes, no place to work, no transportation, and destroyed or lost property. Many families must also deal with the greatest tragedy of all -- injured, missing or dead loved ones. FEMA can provide assistance in all of these areas, often in coordination with the Red Cross and other volunteer organizations.

The first step in disaster assistance is setting up care centers to provide for basic requirements of the victims -- food, water, shelter and medical care. Typically, information on the locations of care centers is broadcast on local TV and radio stations.

Once the basic needs are taken care of, FEMA can help people get back on their feet, find a place to live, and begin rebuilding. When the president declares that the area a major disaster, special aid programs become available. Victims can apply online or by phone.

Next, we'll look at the structure of FEMA and the chain of command.

The application process starts with a phone call to 1-800-

Qualified applicants must live in a county that has been deemed eligible for assistance, and they must have damage that isn't covered by their insurance. You can find the full FEMA applicant's guide here. 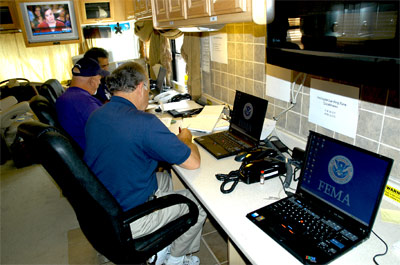 Prior to the formation of the Department of Homeland Security (DHS), FEMA performed many of its current functions. In the 1990s, FEMA was made a cabinet-level agency, and the all-hazards aim of the agency was very much in line with overall homeland security functions. However, the 2001 terrorist attacks exposed the need for a more comprehensive agency that would also coordinate border security, intelligence and law enforcement agencies. Now, FEMA is just one part of the Department of Homeland Security.

FEMA is divided into ten regional offices. These offices work with the states within their region to coordinate disaster mitigation and response. FEMA employs about 2,600 people full-time nationwide, with a reserve of 4,000 more who remain on standby until a disaster strikes.

When a disaster occurs (or prior to it happening, if they have some warning), FEMA starts working with the affected state's Federal Coordinating Officer (FCO). This person is recommended by FEMA and appointed by the president. A Disaster Field Office is set up near the scene of the disaster -- from there, the FCO coordinates relief efforts and works to maintain a flow of information to rescue personnel and political leaders. Federal and state groups work together to provide the necessary relief efforts.

Federal disaster relief is divided into 12 Emergency Support Functions (ESF), each provided by a different agency or agencies. The 12 ESFs are:

Identifies food needs; ensures that food gets to areas affected by disaster

Enables community recovery from the long-term consequences of a disaster

In the next section, we'll look at some of the problems with FEMA. 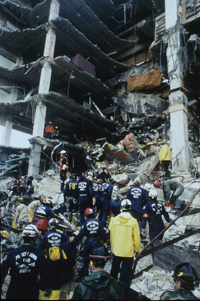 Search and Rescue workers gather at the scene of the Oklahoma City bombing.
Photo courtesy FEMA

For all the good it does, FEMA is not perfect. There have been problems in the past with FEMA disaster response, and those problems have become more obvious in the wake of Hurricane Katrina.

Critics say that one of FEMA's biggest problems is bureaucracy. There are many administrative officials, overlapping state and federal agencies and political agendas. This seems ironic, FEMA was originally formed to eliminate the redundancies and inefficiencies of past disaster management efforts. The agency can act very quickly -- sometimes the president can make a disaster declaration within hours. However, requests have also been denied or sent back because the right forms were not filled out properly, or a signature was missing. Sometimes officials sent requests back through the mail, delaying FEMA's disaster response by days.

Some of the problems may stem from recent changes in FEMA's organization, related to the agency's absorption into the Department of Homeland Security. Prior to this change, state and federal officials would meet, plan and react to disasters together. FEMA was praised for its response to disasters like the Oklahoma City bombing and the 1994 Los Angeles earthquake. The Bush administration has worked to shift responsibility for disaster management from federal agencies to state and local agencies. The government has drastically cut funding for FEMA as well. In Louisiana, funding for studies and flood prevention efforts in the Lake Pontchartrain area was cut by more than $40 million and the Army Corps of Engineers had its budget cut by $71 million [ref].

FEMA was criticized for poor response times to disasters prior to the Bush administration, such as Hurricane Andrew in 1992 and Hurricane Hugo in 1990. Some critics think that the quality of leadership within the agency continues to factor into its uneven response record. Presidents have appointed friends to high FEMA positions, but many of these appointees had little to no experience in disaster management. President George W. Bush was accused of this when he named Michael Brown as head of FEMA.

In the next section, we'll look at problems with the response to Hurricane Katrina.

FEMA can't go into action unless the president declares a major disaster. When a disaster happens, the process usually works like this: 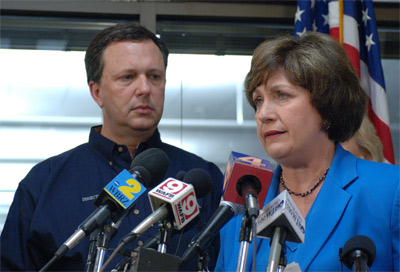 The post-Katrina finger pointing makes it difficult to see who was really to blame for the slow and inadequate response to the Gulf Coast. Ray Nagin, mayor of New Orleans, and Kathleen Blanco, governor of Louisiana, blamed FEMA and the federal government. Michael Brown, head of FEMA at the time of the disaster, blamed "dysfunctional" Louisiana. Brown resigned not long afterwards. Later it was revealed that he planned to resign before Katrina hit, which Senator Susan M. Collins says "may explain in part his curious detachment during the Katrina catastrophe" [ref].

Ultimately, no agency is free from blame. Federal budget cuts left New Orleans vulnerable to a storm that everyone knew may hit someday. Local officials could have done more to help evacuate people who were unable to get out themselves, such as the elderly, the sick and the poor. FEMA could have been quicker to respond. Contacted by Governor Blanco the night the hurricane hit, President Bush did not respond with immediate aid. According to Newsweek, "there are a number of steps Bush could have taken, short of a full-scale federal takeover, like ordering the military to take over the pitiful and (by now) largely broken emergency communications system throughout the region. But the president, who was in San Diego preparing to give a speech the next day on the war in Iraq, went to bed" [ref].

FEMA could have allowed outside agencies to provide aid faster. There are numerous stories of city officials, police departments and volunteer groups who were ready and waiting to go to New Orleans to provide immediate aid, but were turned away by FEMA officials for bureaucratic reasons. There's really no one person to blame -- disaster relief efforts seem to have failed from top to bottom.

To learn more about FEMA and related topics, check out the links on the next page.

To some people, FEMA's incompetence is the least of the agency's crimes. These theorists believe that FEMA is part of a government conspiracy to take military control of the nation and enslave the American people. They claim that FEMA's creation was unconstitutional, and that FEMA has the power to take control of entire states with a simple disaster declaration. FEMA's budget supposedly includes billions of dollars secretly directed to unknown projects and purposes. Wilder claims include a secret bunker in Mount Weather in West Virginia, where an entire government has been set up to take control of the country. Some theorists claim that closed military bases will be used as prison camps for Americans deemed a threat to the new government.

Are the allegations true? There's no definitive proof, and it's hard to imagine what this shadowy government would stand to gain from taking control of all aspects of the country and imprisoning millions of citizens. However, even the craziest conspiracy theories start with a grain of truth. Perhaps FEMA can be easily granted too much control in poorly defined situations.