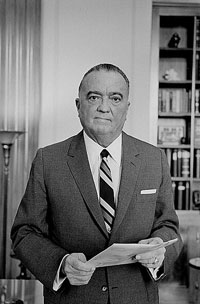 FBI Director J. Edgar Hoover amassed a lot of political power during his tenure -- much of it acquired by using the FBI to intimidate and gather incriminating information about his opponents. In his exposé of FBI corruption, "The Bureau," author Diarmuid Jeffreys wrote, "It was rumored that the director [Hoover] had detailed information about the sexual, political, and financial indiscretions of some of the country's most powerful and famous people and that he had used this information to blackmail his way to power and influence." Hoover remained in his position as FBI Director until his death, although several presidents considered firing him.

After Hoover's death in 1972, some of his personal files were transferred to former agent Mark Felt, the man who was later revealed as "Deep Throat" in the Watergate scandal. The files contained gossip on entertainers, intimidating letters sent to Martin Luther King, Jr., allegations that certain political candidates were homosexual, and documentation of illegal FBI wiretapping [ref]. Hoover's controversial (and mostly illegal) COINTELPRO operation targeted so-called radical groups that protested the Vietnam War or worked for civil rights, alongside other groups that promoted violent overthrow of the government.

At times, Hoover's drive to root out subversives within the United States bordered on paranoia. In a 1966 magazine interview, he proclaimed that American was threatened by "a new style in conspiracy -- conspiracy that is extremely subtle and devious and hence difficult to understand. A conspiracy reflected by questionable moods and attitudes, by unrestrained individualism, by nonconformism in dress and speech, even by obscene language, rather than by formal membership in specific organizations" [ref].

Both in life and in death, persistent rumors pegged Hoover as a deeply closeted homosexual and cross-dresser, and that proof was in the hands of the Mafia. However, solid evidence of these allegations has never been found.

Next, we'll learn about some of the investigative methods and tools used by the FBI.

In 1934, Congress granted FBI agents the authority to carry guns. For many years, the standard FBI gun was the .38. In the 1990s, the Bureau switched to 10mm semi-automatic handguns. These weapons proved to be too powerful for standard duty, and .40 caliber Smith & Wesson guns replaced them. During training at the FBI Academy, agents fire 3,000 .40 S&W rounds, as well as shotgun rounds and 10mm sub-machine gun rounds [ref].