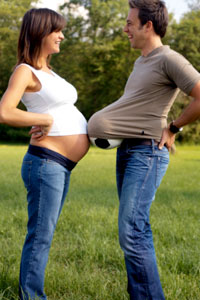 After pop superstar Beyonce Knowles gave birth to daughter Blue Ivy in January 2012, her husband, rapper Jay-Z, publicly promised to quit referring to women in his lyrics as a not-so-nice term for female dogs [source: Wade]. Perhaps, Occidental College sociologist Lisa Wade conjectured, that verbal about-face was a real world example of how fatherhood can alter a man's mindset. To support this idea, Wade pointed to a 2011 study published by a team of Stanford University sociologists in which the researchers discovered that having a daughter, as opposed to a son, can diminish a new father's gender biases [source: Shafer and Malhotra]. In Jay-Z's case, he wouldn't want to hear Blue Ivy slurred on account of being female, hence he felt compelled to eliminate similar sentiments in his own vocabulary.

Having a child certainly impacts a new parent's mindset in various ways for the sheer fact of having direct responsibility for someone else's well-being. It's common knowledge that pregnancy can irrevocably change a woman's body, leaving behind stretch marks, swollen breasts and wider hips. More recent scientific attention paid toward fathers also underscores that becoming a dad can have a physical effect on men as well. For instance, doctors acknowledge that Couvade syndrome, or sympathetic pregnancy, isn't out of the ordinary for expecting fathers [source: Nippodlt]. A 2009 British survey found that men gained an average of 14 pounds (6 kilograms) during their partners' pregnancies, which could be attributed to sympathetic pregnancy, and other Couvade syndrome symptoms include nausea, leg cramps and backaches [source: Belkin].

Physiological changes related to new fatherhood also shed light on how men may be more biologically engineered for caregiving than previously thought. During partners' pregnancies, dads-to-be produce more prolactin, a hormone that signals the body to store fats and sugars and tamps down the libido [source: Pincott]. Meanwhile, the stress hormone cortisol surges as the birth days approach, keeping men both attentive to their pregnant partners' needs and primed to take action when the water breaks [source: Abrams]. Once a baby is delivered and dad embarks on changing diapers and feeding, another compelling hormonal reaction occurs: His testosterone drops. A September 2011 study out of Northwestern University confirmed that new dads who are actively involved with infant caregiving exhibit markedly lower amounts of testosterone in their bloodstreams than their childless bros [source: Gettler et al].

Considering the testosterone drop and the how modern dads are assuming more traditionally maternal roles, it might seem like active fatherhood is simply making men more like women. But long-term health studies of dads versus their childless counterparts actually find otherwise. Diminished testosterone keeps men's risk-taking behavior in check, and engaged fatherhood is associated with better mental and physical health down the road, after the kids have flown the nest [source: Cullen and Grossman]. In 2011, for instance, a Stanford urologist calculated dads have a 17 percent lower chance of developing fatal heart disease than non-dads [source: Goldman]. But researchers also emphasize that it isn't the sperm donation that makes the difference. In other words, merely having a child won't magically transform a regular Joe into the Bionic Man. On all levels -- childhood development, relationship satisfaction, personal health benefits -- it's playing-catch, helping-with-homework, hugging-and-kissing fatherhood that reaps rewards for the entire family.