What difference do dads make? 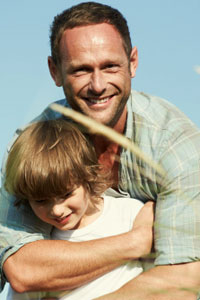 Today's dads are slightly more likely to give their kids hugs than dads of families past were. According to research published in 2002 by Scott Coltrane, fatherhood expert and sociologist at the University of California, Riverside, 93 percent of fathers give their children a squeeze at least once a week, compared to 90 percent the previous decade [source: University of California]. A hugging statistic may seem trivial, but that physical contact can have profound ripple effects. As recent research on father-child relationships catches up to the reams of data collected on maternal bonding, it clearly indicates that receiving affection from dad is equally important to maternal doting [source: American Psychological Association].

In a nutshell, active and engaged fathers have a positive long-term effect on sons and daughters. Having dad around the house is associated with higher academic achievement, as well as lower rates of substance abuse and delinquency. For instance, a 2004 analysis of 24 longitudinal studies on father involvement reiterated that paternal engagement helps produce smarter, happier boys and girls who stay out of trouble [source: Sarkadi et al]. Even fathers tidying up or mowing the lawn with kids in tow can reap rewards beyond spotless homesteads. UC Riverside sociologist Scott Coltrane and his colleague Michele Adams charted a correlation between dads who cleaned their houses and kids with better-adjusted social skills [source: Lovekin].

But what about when dad isn't around? According to the National Center for Fathering, 39 percent of school-aged kids and teenagers don't live with their biological fathers and are five times more likely to live in poverty [source: National Center for Fathering]. Due to the high percentage of single-mother homes, the U.S. government also funds the National Responsible Fatherhood Clearinghouse as a way to encourage active fatherhood among American men and study how it relates to child outcomes.

At the same time, with lesbian and gay households becoming more common, it should also be noted that the child outcome advantages of having an involved father isn't so much the product of gender, but parenting resources. A 2010 study from New York University found that children in loving lesbian households fare as well as children with loving heterosexual parents, since both sets of kids receive support and resources -- financial, emotional, intellectual -- from two people [source: Bryner]. In fact, lead researcher Judith Stacey suggested that gay fathers may turn out to be the best fathers, since the hurdles they must cross to adopt a child speak to their commitment to fostering his or her brightest future [source: Conger].

And not only do dads have a positive impact on children, fatherhood can be a boon for men, too.