New Fatherhood and the Modern Family 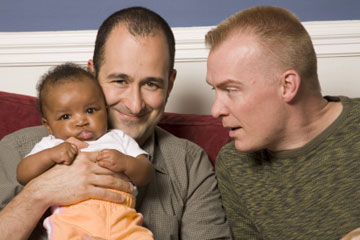 Modern fatherhood ain't what it used to be.
Bruce Rogovin/Getty Images

In many ways, 21st-century fatherhood emulates the softer sides of parenting. The desire to provide economically for their families hasn't disappeared among men, yet they don't see gainful employment as their primary role anymore. A 2010 survey of new dads conducted by Boston College found that a majority considered childcare as important, if not more important than, earning a paycheck [source: Harrington, Deusen and Humberd]. Detailed demographic data from the fatherhood research also indicates a shift in attitudes among younger generations of dads who embrace a broader range of paternal responsibilities that bridge emotional and financial support. For instance, survey participants over 40 years old were more likely to perceive fatherhood as strictly a breadwinner role, compared to their younger counterparts [source: Harrington, Deusen and Humberd].

Also, with flexible work options and paternity leave becoming more common benefits in the workplace, dads are investing more time in their children, not because they have to but because they want to. Sweden, for instance, has become known for its generous parental leave policies, guaranteeing new fathers at least two months off at 80 percent of their salary. Consequently, 85 percent of Swedish dads take advantage of their paternity leave, staying home an average 84 days in 2002 [source: Bennhold]. The United States, on the other hand, doesn't offer legally protected paternity leave, and American dads rarely leave the office for more than a week following the birth of a new child. Perhaps for that reason, 77 percent of U.S. fathers report wanting more quality time with their kids [source: Harrington, Deusen and Humberd].

The rise of the at-home dad is another signpost of this melding of the motherhood and fatherhood dichotomy. And like a reverse exodus of the Industrial Revolution-era fathers from homesteads, economic forces have swept millennial men back over the threshold. With the Great Recession disproportionately gouging male-dominated industry sectors, the percentage of working moms out-earning their husbands leapt to 25.9 percent in 2007 [source: Mantell]. In 2010, the U.S. Census estimated 154,000 at-home dads, a 60 percent jump from 2004 [source: Randall]. Moreover, University of Texas associate professor and at-home father expert Aaron Rochlen suspects the actual number to be much higher, since the Census Bureau doesn't count gay households, single fathers, or dads who earned any income in the at-home tally.

Yet a debate still simmers on many home fronts about who does what behind closed front doors, and more specifically, about what exactly dads do.

Papa's in the PTA

One manifestation of the broadening concept of fatherhood is paternal participation in Parent and Teacher Associations. From 1999 to 2009, dads' PTA attendance rose 125 percent, and the National PTA elected Charles J. Saylor the first male president in the organization's history in 2007 [source: Spencer].