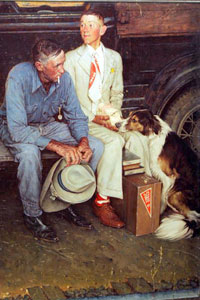 By 1910, when Sonora Smart-Dodd's dream of pioneering Father's Day came to fruition, the paternal role in Western society had already undergone a significant transition. Thanks in large part to the Industrial Revolution, which rumbled to life around 1750, agrarian society, which focused family life around at-home production of goods and services and earning income off the land, had come to a close. And with that, the role of dads shifted beyond the homestead, simultaneously transferring primary parental responsibilities to hearthside moms [source: Mintz].

Prior to the Industrial Revolution, the father had long been considered the primary parent, an idealized combination of provider and intellectual caregiver. That primitive patriarchal model stretched back to the ancient Greeks and Romans and held more or less stable during the ensuing centuries, reinforced by religious doctrine. Legally and culturally, men were granted authority over their wives, children and land, a default position of power demonstrated by the direct coverture laws that denied wives property rights, down to the symbolic throne-like armchairs that became the sanctioned seat for dad in early American homes [source: Mintz]. In addition to their more disciplinarian duties, pre-Industrial Revolution fathers also guided their children's academic and religious upbringing, and in divorce cases, judges almost universally granted child custody to dads -- a legal trend that would eventually swing in favor of mothers [Larossa].

By the mid-1800s, mothering had become the cherished and lauded parental function. Fathers toiling in industrial centers outside the home cemented their job duty of bringing home the bacon, while child psychologists and women's publications of the day exalted the nurturing that dutiful wives and mothers had to offer. Although a distinction between so-called women's work -- cooking, cleaning -- and men's work -- farming, manual labor -- had existed previously, the geographical cleaving of the home and workplace effectively promoted the mother-child bond as the fundamental parent-child relationship. The tumultuous first half of the 20th century, which bumped along with the Great Depression, World War I and World War II, further molded the institutional fatherhood ethos of masculinity and moneymaking.

In recent decades, American dads once again reached a crossroads between worker and caregiver roles, spurred by the rise of a complementary breadwinner: the working mom. Although the close of World War II sent many women back home from their temporary wartime employment, they wouldn't stay in the kitchen for long. From 1948 to 2001, the rate of mothers working outside the home doubled, and as of 2010, 70 percent of moms with school-aged children were employed [source: American Psychological Association and U.S. Bureau of Labor Statistics]. Soon, the detached dad of the post-War era would be a cultural relic -- replaced by a new kind of fatherhood.