Browse the article How Fascism Works 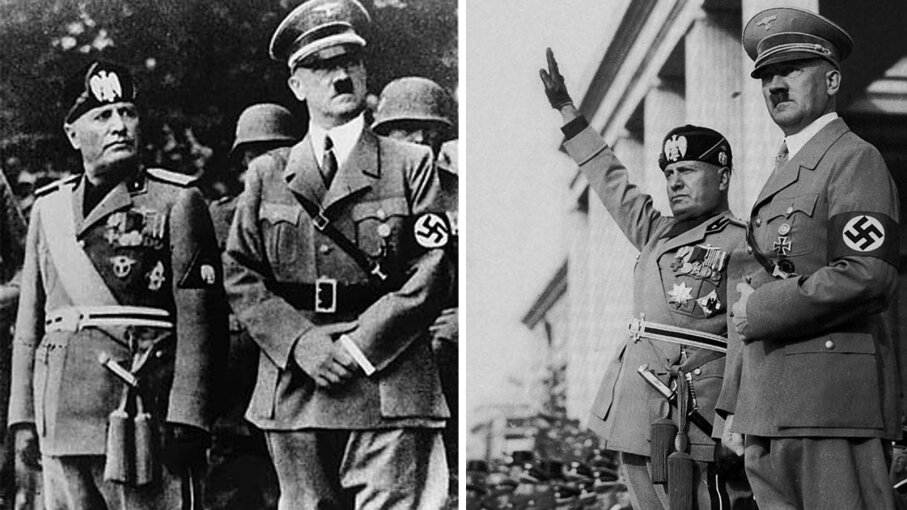 In 1922, Benito Mussolini gained control of Italy and introduced the world to fascism, a political philosophy that eventually brought the world to war. Mussolini didn't invent the idea of fascism, but he coined the term and defined it. In 1932, Mussolini wrote that fascism "believes neither in the possibility nor the utility of peace" [source: Fordham].

In fascism, the State is all that matters, and constant conquest — war — is a necessity for the glory of that State. The glory of the people comes by extension. "War alone," wrote Mussolini, "brings up to its highest tension all human energy and puts the stamp of nobility upon the peoples who have courage to meet it" [source: Fordham].

"Fascism" is a word thrown around a lot these days. Yale philosopher Jason Stanley wrote a book pointing out similarities between historical fascists and U.S. President Donald Trump. Former U.S. Secretary of State Madeleine Albright warned in 2018 that fascism around the world now is a bigger threat to peace than at any time since the end of World War II.

Some use the term to describe any authoritarian person or government, especially one that rules by violent means. But authoritarianism is only part of the philosophy. Communism under Joseph Stalin was authoritarian and extraordinarily violent, but fascism, with its distinction between classes, stands in direct opposition to communism. Fascism embodies a philosophy of extremism that seems foreign to modern values but in fact still exists today in pockets around the world.

In this article, we'll look closely at fascism, find out what the term really means and how the ideology has been used to unite nations and divide the world. We'll also see what conditions must exist for fascism to seem appealing: What does it take for millions of individuals to support a philosophy that explicitly negates their personal value? 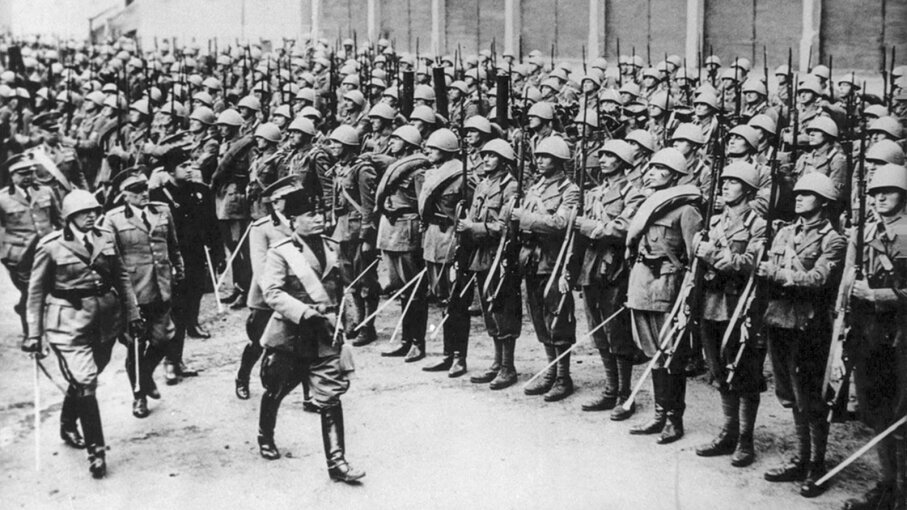 The Fascist State is itself conscious and has itself a will and a personality...

Fascism is notoriously difficult to define because it has no single philosophy. Mussolini's brand of Fascism (capital "F") is not exactly like Adolf Hitler's brand of fascism (lowercase), which is different from the neo-fascist views of groups like the skinheads and post-World War II beliefs. Still, there are some core principles that identify a fascist movement:

Fascist regimes are also typically violent. In fascist ideology, the State cannot achieve and maintain power without strict discipline and the complete unity of mind and body. In this way, physical violence is necessary to suppress anyone who stands outside the group and in the way of the State's power. The State's ever-increasing strength is, in effect, the meaning of life.

One might wonder, then, what life is like in a fascist society. How exactly does one live for the glory of the State? We'll learn how in the next section. 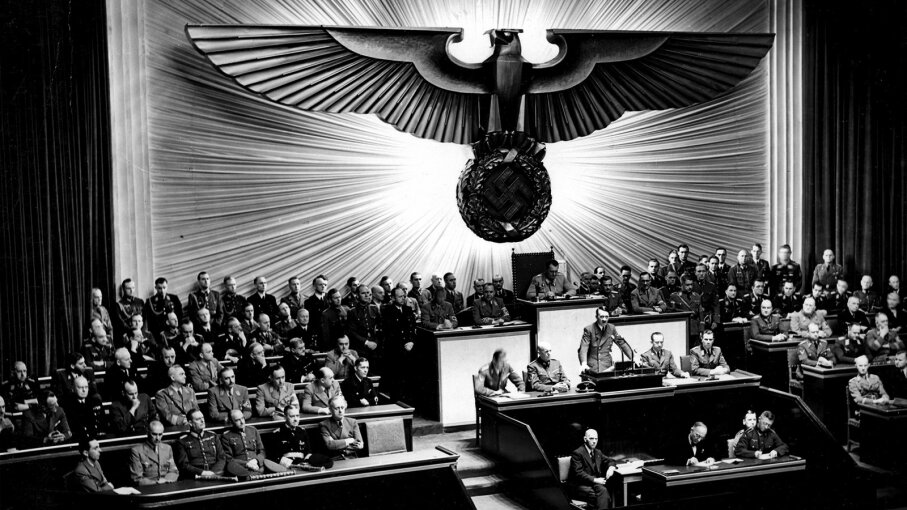 German dictator Adolf Hitler announced a declaration of war against the United States to the Reichstag on Dec. 11, 1941. Wikimedia/Used Under Creative Commons CC BY-NC-ND 3.0 License

... the [individual] is deprived of all useless and possibly harmful freedom, but retains what is essential; the deciding power in this question cannot be the individual, but the State alone ...

While the fascist State is the center of the universe, the primary goal of fascism is social regeneration —the lifting up of a particular group of people. Regeneration is achieved through national unity and a rejection of individualism. This requires the people's initial support. A fascist regime generally gains this support by promoting a series of ideas through the media, public rallies and other forms of propaganda. These ideas include:

Fascism arises from poor socio-economic conditions — like those of post-World War I Europe or post-World War II Japan. The countries that were defeated in World War I — including Mussolini's Italy — suffered greatly from the restrictions placed on them after the war. In Germany, a fascist form of government promised a return to a better life and a better position in the world.

In fascism, remember, individuals exist only in relation to the State. The principles of democracy and capitalism, which stemmed from the European Enlightenment of the 18th century, stood in the way of the power of the State. In fascist terms, these trends — based on concepts of individuality, equality and positive self-interest — limited the unity and the drive for survival necessary for social renewal. Mussolini wrote in 1932, "Fascism denies [...] the absurd conventional truth of political equality [...] the myth of 'happiness' and indefinite progress'" [source: Fordham].

By dispelling the idea of happiness, the fascist society is able to constrain its people and convince them to submit for the greater good. People cannot gather without permission, and they can't say anything negative against the State. Instead, they are submerged in an extreme sense of national and ethnic unity. Political youth groups recruit the youngest members of society, teach them about the State and entrust them with its survival and its power. Fascism glorifies youth, which makes sense if you consider the ideal of survival of the fittest — the young are the strongest and the fittest.

State-sponsored rallies and parades dominate social life, national flags and imposing monuments loom over the landscape, and State holidays fill the calendar. These symbols and celebrations have a religious quality. They encourage absolute faith; in the State, not in God. Fascism, in general, is against any religion.

Of course, not all societies aspire to the same goals. How did Mussolini's Fascism differ from Hitler's? How has fascism evolved with the times and changing world conditions? Find out next.

"Fascism" comes from the Italian term fascio, meaning "bundle." Mussolini first used the term in 1919. It has its roots in the Latin fasces, a bundle of sticks tied to a single axe — a symbol of unity and righteous power in ancient Rome. One might say the fasces embodies the essence of fascism: The people are the sticks, tied to the state to form a strong, single unit. The State is the axe, which has the power to create, to enforce and to obliterate. 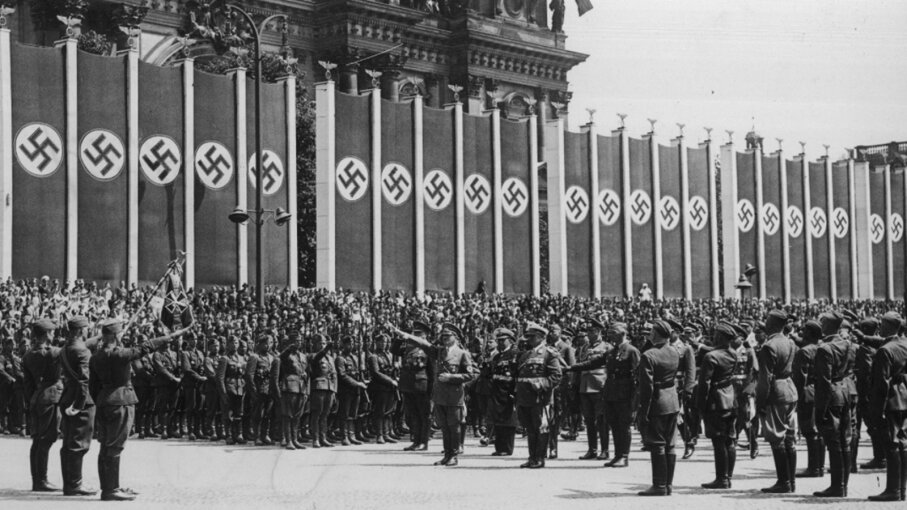 German dictator Adolf Hitler greets the Condor Legion, the air force and army of Nazi Germany, which served with the Nationalists during the Spanish Civil War of July 1936 to March 1939. Public Domain

Fascism was at its height between 1918 and 1945 — the end of World War I through the end of World War II. Europe's general upheaval during that period left it receptive to fascist ideology. But there were differences in the ideology's implementation. In Italy, the home base of the Catholic Church, complete rejection of organized religion was unwise. Mussolini claimed ties to the Catholic Church when it suited the State's interests, and the Catholic Church was at times accused of being part of Fascist rule. Hitler occasionally proclaimed himself a protector of the Church. Yet he openly destroyed members of religious minorities — most notably Jews but also Jehovah's Witnesses and others outside of the mainstream.

Another difference between the two most powerful fascist regimes in history was the driving force behind their respective military pursuits. While Mussolini focused on conquest primarily to show the strength of the State, Hitler made conquest more of a race issue. Hitler strove to unite the entire Aryan race, which he saw as a supposed "master" race of northern European descent. This was a primary drive behind the invasion of neighboring countries like Austria. Hitler believed that Austrians were part of the Aryan race and should thus be part of the German State. With the Aryan race united under his rule, Hitler believed Germany could conquer the world.

When the Axis powers, including Germany and Italy, lost World War II, their fascist regimes became widely viewed as evil. Fascism fell out of favor, inextricably tied to genocide and world war. After World War II, with economies improving around the world and the Allies' tight control over the defeated countries, the chaos that fascism relies on was mostly gone. Fascism in its original form never again gained a strong enough foothold to take control.

But is fascism completely dead? What fascist ideals live on as fringe movements? Read on to find out about new fascism, or neo-fascism.

The Iron Guard in Romania was the only true fascist movement outside of Italy and Germany to gain real power in the 1930s. With the support of Nazi Germany, it nearly took control in Romania in 1941. But when chaos starting breaking out in response to the group's acts of violence, Hitler decided the Iron Guard had to be put down. He told Romanian General Ion Antonescu to go ahead and wipe out the movement.

Neo-fascism on the Rise 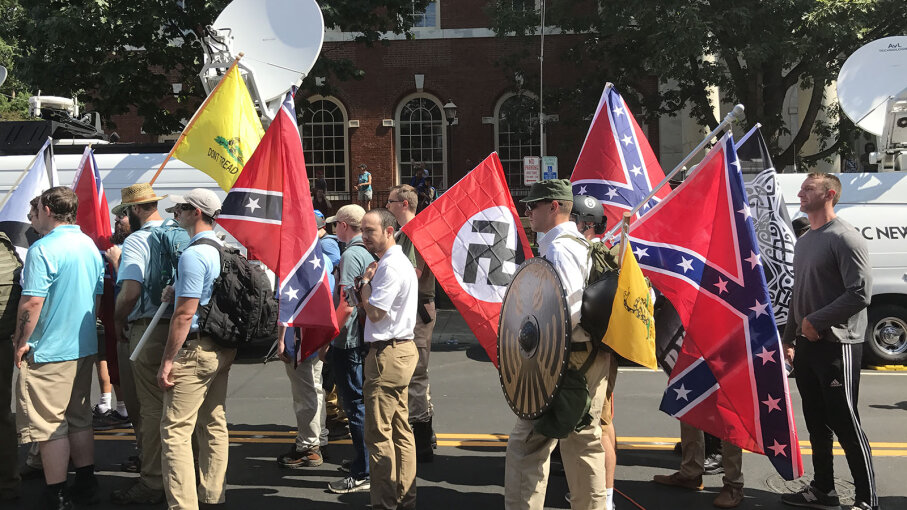 Proclaimed members of the alt-right marched during a white nationalist rally in Charlottesville, Virginia, in August 2017. Wikimedia/Used Under Creative Commons CC BY-NC-ND 2.0 License

Today, governments that ascribe to some traditionally fascist ideals like racial purity and the dominance of State interests pursue these ideals in forms like:

One fascist value that's now universally rejected is that of military aggression. But the fall of true fascism in 1945 didn't destroy the movement. Neo-fascism (sometimes "neo-Nazism" if it's specifically based on the views of Hitler) is alive and somewhat well. Mostly, neo-fascism is a variety of small, separate movements through the world that espouse the ideals of power, supremacy and ethnic purity. These groups don't have the power to pursue the military component of fascism, but they sometimes practice the violence.

Neo-fascists took responsibility for the bombing of the Alfred P. Murrah Federal Building in Oklahoma City in 1995; a series of bombings in Germany in the 1990s targeting immigrants; and several bombings in London in 1999 against racial minorities and homosexuals. And many blame neo-Nazis and white nationalists for the violent confrontations that occurred in Charlottesville, Virginia, in August 2017.

On the other hand, there are neo-fascist movements that are strangely sensitive in their pursuit of fascist ideals. Some espouse a "love of difference" mantra instead of a belief in racial supremacy. They claim to want to prevent interracial mingling because difference is a good thing, not because one race is better than another [source: Encyclopaedia Britannica].

While neo-fascism is widespread, it hasn't become powerful enough to take hold in any significant way. But neo-fascists attempt to gain support and power the same way other political groups do: political involvement, literary publications and all sorts of internet marketing.

For lots more information on fascism and other political philosophies, check out the links below.

Some people think of Francisco Franco's regime in Spain as a fascist one, but it was really quasi-fascist. During the Spanish Civil War (1936-1939), Franco joined forces with the fascist rebel Falange movement. When the rebels won, Franco took control of the country. Franco incorporated some of the fascist ideologies of the Falange party into his government, but made it clear that it was the government and Spain's ruling class running things, which made Spain under Franco different than fascist party-states like Germany and Italy [source: Encyclopaedia Britannica].