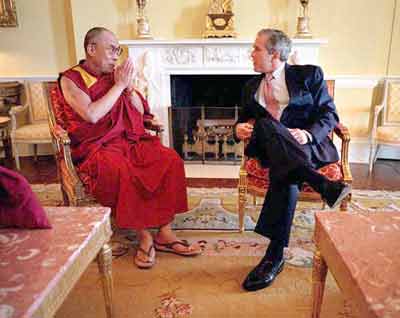 It's reasonable to think that modern technology and prison improvements would cut down the number of escapes and escape attempts. However, the desire for freedom is stronger than any technology, and not all prisoners are literally kept "behind bars." While the vast majority of escape attempts are unsuccessful, here are the stories of a few people who managed to make it past natural barriers and guards through a combination of wit and will.

In 1959, Chinese armies stormed the capital of Tibet. Crowds of Tibetans swarmed around the summer home of Tenzin Gyatso, the 14th Dalai Lama and Tibet's spiritual and political leader. They hoped to protect him from the advancing troops. Disguising himself in work clothes, the Dali Lama and walked through the crowds in the city of Lhasa without being noticed. When he reached the Kyichu River, a pre-arranged boat waited for him. Eventually, the Dalai Lama crossed the Himalayas over the 16,000-foot Che La Pass to India. He has lived in Dharamsala, India and maintained the Tibetan government in exile ever since.

The Dalai Lama was awarded the Nobel Peace Prize in 1989. He continues to have talks with the Chinese government and says he strives for a happy medium in which Tibet would operate independently as part of China.

Alcatraz Island was home to the most violent and hardened criminals in the United States for several decades. The prison opened in 1934 with the rationale that it would be a very difficult place to escape. The island itself is more than a mile from the mainland and surrounded by treacherous waters. In addition to the natural barriers, authorities tightened security by adding electric wires, fences, bars and gun towers.

Alcatraz in 2005, as seen from a boat in the San Fransisco Bay.
Image courtesy Edward Z. Yang

Despite these obstacles, in 1962 three Alcatraz inmates staged one of the most notorious prison escapes in history. Frank Morris and brothers Clarence and John Anglin spent months chipping away at the concrete around the air shafts in their cells. They used tools such as nail clippers, spoons and a drill fashioned out of a fan. The goal was to create an opening big enough to wiggle through into the prison's ventilation system. To hide their progress when they weren't working on the hole, the inmates filled it in with a paste made from wet newspapers.

On June 11, 1962, Morris and the Anglin brothers left dummies in their beds, climbed out of the prison through the ventilation system and left the island in a raft fashioned from barrels and stolen raincoats. The escapees never appeared on the mainland, and most people assume that they drowned. Parts of their makeshift raft and some of the their letters were found on nearby Angel Island. Their story was the basis for the movie "Escape from Alcatraz," starring Clint Eastwood.

In September 1979, Peter Strelzyk and Guenter Wetzel piloted a homemade hot air balloon from East Germany to West Germany to escape communism. Their wives and children were aboard.

The famous flight took 28 minutes and spanned 15 miles. Strelzyk, an electrician, and Wetzel, a bricklayer, spent two years planning the escape. Their wives sewed a 60-foot-wide, 75-foot-high balloon out of curtains, bed sheets, shower liners and other fabrics of every color. The men, who got the idea after watching a television show about hot air balloons, built platforms, gas burners and a makeshift flamethrower in Strelzyk's basement.

On the night of the escape, they gave the youngest child, a toddler, a sedative to keep her quiet. The Strelzyks and the Wetzels then drove to the launch site and began setting up around 1:30 a.m. The men piloted the balloon as best they could in the dark.

When the families landed, they weren't sure whether they had made it all the way across the border. After spending some time hiding in a barn, they realized that they were free after spotting an Audi, which were only made in West Germany. The story inspired the film "Night Crossing," starring Beau Bridges, which came out a few years later.

Turkish officials arrested American Billy Hayes in 1970 for trying to smuggle hashish out of Turkey. He served five years in an island prison before escaping.

After a fight with prison guards, Hayes stole one of their uniforms and snuck out of the prison. He then stole a rowboat and rowed all night in a fierce storm. After reaching land, Hayes traveled through Turkey for days, dying his blond hair black as a disguise and finally swimming across a river to Greece. He used $2,000 his father smuggled into the jail in a photo album to fund his escape.

Hayes' story was the basis for the controversial movie "Midnight Express." The 1978 movie won a Golden Globe for best dramatic film and Oliver Stone won an Academy Award for the movie's screenplay. In a 1997 interview, Hayes, who went on to have a career in the entertainment industry, told USA Today that his escape was more harrowing than the movie depicts. (The movie focuses more on the horrible conditions of his prison experience.) In recent years Hayes has also condemned the way that the film deviated from his book, which he feels gave the impression that "all Turks are monsters." He says that his intended message was "don't try to smuggle drugs," but some American viewers saw it as a reason to avoid Turkey.

The convicted killer of Martin Luther King Jr. escaped the Brushy Mountain State Prison in Tennessee in June 1977. He and six other convicts used a makeshift ladder to scale the 14-foot-high walls while guards were distracted by a fight other prisoners staged about 200 yards away. One man was shot on the wall, but Ray got away, eluding authorities for 54 hours before his recapture. The Washington Post called it "one of the greatest manhunts in modern memory."

A Wanted poster from one of Ray's earlier escape attempts.
Image courtesy FBI

Ray was already known for his prison break attempts. At the time of King's murder, he was an escaped convict. Before the ladder incident, he had two unsuccessful escape attempts. Ray died in April 1998 while serving a 99-year prison sentence.

In December 2000, seven criminals escaped from the John Connally unit in Kenedy, Texas using an elaborate and carefully orchestrated series of scams. Several of the men, who worked on the maintenance crew, asked for permission to stay behind during lunch to wax and seal the floor of a maintenance facility. They also got permission to eat lunch there with food they had purchased from the commissary, instead of joining the others in the main dining area. The men then called the maintenance supervisor in to ask him for help. After the supervisor arrived, he was beaten and tied up.

They also attacked and tied up several others who got in their way, including civilian workers, guards and a few uninvolved inmates. The men impersonated guards on prison phones to gain entrance to an area near the prison exit. They attacked a prison guard at the gate and threatened to kill him if he didn't open it. The guard complied and the Texas 7 were free, driving in a van loaded down with guns stolen from the guard shack. While on the run, the men killed a Dallas-area police officer who interrupted their robbery of a sporting goods store.

One of the largest manhunts in Texas history followed. Hundreds of city, state and federal officers chased dozens of leads. Two of the men had already been convicted of murder, two of armed robbery, one of child abuse, one of serial rape and one of burglary and rape. "These guys are extremely unpredictable and dangerous," San Antonio FBI spokesman Darren Homes told USA Today during the search.

Authorities eventually captured six of the escapees in Colorado in early 2001 (the seventh committed suicide). Two of the men gave a live television interview before their arrest in which they harshly criticized the penal system. All six men were sentenced to death for the murder of the Dallas-area police officer and await execution on death row.

In March 2005, Brian Nichols, a defendant in a rape case, escaped from the Fulton County Courthouse in Atlanta, Georgia. He has been accused of killing four people during and after his escape.

A timeline issued by the Fulton County Sheriff's Department in April 2005, outlines the events: Just before 9:00 a.m., Nichols attacked guard Cynthia Hall when she removed his handcuffs so that he could change clothes before a court appearance. He left Hall unconscious, took her gun and went to the chambers of Judge Rowland Barnes. There, he shot Barnes and court reporter Julie Brandau, according to the accusations. As Nichols fled, officials say, he shot and killed Hoyt Teasley, another law enforcement officer.Nichols then carjacked several people, donning a jacket that belonged to one of them as a disguise.

Hours later, Nichols killed off-duty U.S. Immigration and Customs Enforcement agent David Wilhelm, stealing his gun, badge and truck. More than 24 hours after Nichols escaped the courthouse, authorities captured him at an apartment complex north of Atlanta. He had been holding its resident, Ashley Smith, hostage.

A grand jury issued a 54-count indictment against Nichols in May 2005. Charges include four counts of felony murder. Nichols pled not guilty and his trial is scheduled to begin in October 2006.