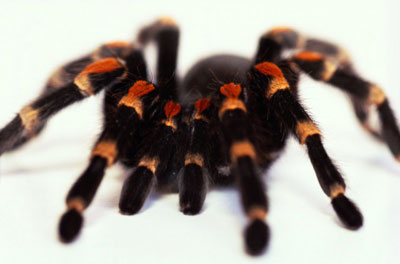 It's never an easy decision, but I'm thinking a nice pinot noir should be paired with this guy.
Stuart Westmorland/Getty Images

Today, most cultures around the globe feast on insects. There are 1,417 species of edible insects and nearly 3,000 ethnic groups that currently practice entomophagy around the world [source: Ramos-Elorduy]. Most of these insects are eaten in the larval and pupal stages, though some are good all the way into adulthood. Topping the list of edibles is the beetle, with 344 varieties to choose from for dinner. Ants, bees and wasps are close behind with 314. Butterflies, moths, grasshoppers and crickets are the other heavy hitters.

So who's doing all of this bug eating? Asians lead the way. All over Asia, moth larvae, crickets, moth pupae, beetles and dragonflies are eaten. Crickets are dry-roasted for snacking or cooked into rice. The larvae are added to soups, stews and stir-fried meals. The Japanese consider the silk moth pupae a delicacy. But none of these hold a candle to the giant water bug. This critter is a favorite in Asia. It can be roasted and eaten whole or ground into a paste for sauces.

Africans also enjoy the crickets and grasshoppers, but mix things up a little by eating termites and caterpillars, too. Things get a little wacky in South America. Here, arthropods are often found on the menu. Scorpions and even tarantulas are cooked and eaten with regularity. Tarantulas are said to be a little on the greasy side, and the taste often leaves brave westerners with a loss for words. Peter Menzel, author of "Man Eating Bugs" describes it this way: "If day-old chickens had no bones, had hair instead of feathers, and were the size of newborn sparrow, they might taste like tarantulas" [source: Menzel]. Not exactly a ringing endorsement.

The fact that most Americans and Europeans might find eating arthropods gross is due to cultural bias and history. Once farming and raising animals for consumption became the norm, insects became the enemy. After all these years of trying to get rid of insects, it's hard to turn around and consider them food. There's also a bit of hypocrisy going on here. Lobsters and crabs are both crustaceans, but they're prized as expensive seafood instead of an odd delicacy like their spider relatives. Most insects are much cleaner than lobsters and crabs, too. Their diet of clean grass sets them apart from these oceanic vacuum cleaners that eat whatever refuse they can scavenge from the ocean's floor.

In the next section, we'll look at the benefits of entomophagy.

Not that kind of wormhole!

Space -- the final frontier. It may be hard to imagine the advanced world of space colonization relying on insects, but it may turn out to be the case. In order for humans to survive in outer space, they're going to have to eat. Trucking food to Mars isn't exactly cheap delivery, either. So the best thing to do is to learn how to harvest our own food. Problem is, there isn't a lot of grass on the moon to feed cattle, and there's also the matter of them constantly floating away. Enter insects. Researchers think that silkworms, beetles and termites would all make excellent space food. They're easily raised and harvested, don't take up much room and they don't compete with humans for food. We probably won't be able to subside on insects alone, but they can greatly reduce the amount of meat we need for protein.