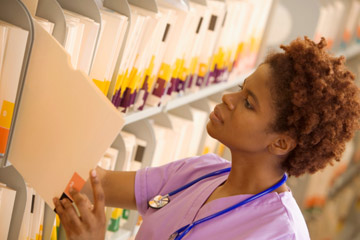 Soon, finding a patient's medical record may be as simple as going online.
Digital Vision/Thinkstock

Though many doctors who have adopted electronic medical records report satisfaction, not many medical professionals have used the technology. According to one survey, only 15 to 20 percent of doctor's offices in the United States use electronic medical records, while just 20 to 25 percent of hospitals do [source: Hillestad et al.]. Adoption has been extremely low in small offices (one to three doctors), which is where almost 50 percent of the nation's doctors practice [source: Lohr]. Implementing electronic medical records presents particular challenges to these small offices, because the time required to switch to the new system might result in fewer patients seen, which is a loss that small practices can't easily absorb.

Once those small offices began using the technology, they'd likely have more time to see patients and may eventually increase the number of patients that doctors could see in a given day. However, this challenge is representative of most of the challenges facing widespread adoption of electronic medical records. These systems require a huge upfront cost in terms of software, hardware, training and time, and the savings that they could bring may not be seen for a few years. A doctor's office may invest thousands of dollars in the system, only to see a local hospital benefit from the office's work and financial outlay. Additionally, the true benefit of electronic medical records only comes when there are many doctors that have the technology; without a robust network, there's no one to share the information with. And it's possible that a medical practice could invest in a system, only to have all other doctors purchase another system, rendering that practice's work obsolete.

In order to help with these high upfront costs, Congress included money for conversion to electronic medical records in the 2009 stimulus bill. Doctors and hospitals may begin collecting funds to pay for their new systems, and in preparation, the Department of Health and Human Services has been issuing guidelines on which systems are acceptable and how they must be used. On the next page, we'll take a look at the money that's available and the strings that are attached.