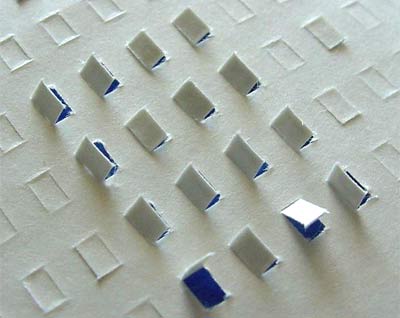 With a paper-based system, the electronic component is usually a tabulation device. This means that votes are counted on an electronic system, which is much faster than a manual count. Some ballot printing systems resemble DRE systems. Voters use a touchscreen or similar electronic device to make their choices. When the voter submits his vote, a printer attached to the device produces a physical paper ballot. An election official or volunteer takes all the paper ballots produced to a centralized location for counting once the polls close. A separate electronic device optically scans these ballots and tabulates the results.

One of the advantages of a paper-based system is that the ballot is physically represented by a piece of paper. This tangibility reassures voters that their choices are being counted. Still, a physical ballot does not ensure a vote will be correctly counted. Many factors can contribute to a misapplied vote. Holes in punch cards may not be properly aligned or fully punched, resulting in a “hanging chad,” made infamous in the 2000 election in Florida. On optical scan cards, stray marks or incomplete markings may be misinterpreted when tabulated. Printers that mark optical scan cards can run low on toner, resulting in cards with incomplete or unreadable marks. It may also be possible for a voter to vote for two or more candidates for a single position, known as overvoting; these selections are not counted by tabulation devices.

Physical ballots can be lost or destroyed before tabulation. Still, it is far more difficult to lose paper ballots than it is to lose an intangible electronic record. In the next section we will examine Direct Recording Electronic systems, some of which record votes solely on just such an intangible record.

A Direct Recording Electronic System is essentially a computer. Voters view ballots on a screen and make choices using an input device such as a bank of buttons or a touchscreen. Some DRE systems also employ a card swipe or cartridge system that must be activated before a ballot can be cast. Votes are stored on a memory card, compact disc or other memory device. Election officials transport these memory devices to a centralized location for tabulation, just as they would with paper-based ballots. Some machines have the capability to broadcast results over a modem-to-modem line, though due to concerns about data security, these results are normally deemed unofficial until they can be verified by tabulating the results stored on the memory devices. Many DRE devices also have the capacity to print a paper record of ballots cast. Some, however, have no corresponding paper trail.

A DRE system can have major advantages over paper-based systems, assuming it is secure and reliable (more on that later). Because ballots are displayed electronically, there are no limitations on a ballot’s appearance. Programmers can create ballots in any language. They can design large print layouts for voters with poor eyesight or even record and incorporate audio files for blind voters. Election officials do not need to estimate how many ballots to order for each possibility; any particular format could be called up as situations arise.

Since votes are recorded on a memory device, tabulation takes less time. There are no paper ballots to scan, so there’s less risk of mechanical error. While human error is still a factor and there is always a concern about software bugs; in an ideal system, tabulation is instantaneous with no need for recounts.

In the next few sections, we will look at some of the concerns critics have regarding DRE systems.