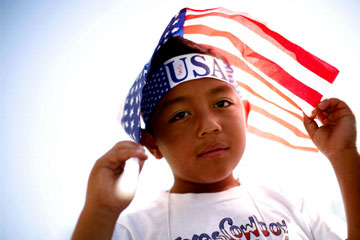 As of 2008, about 612,000 undocumented youth had earned American high school diplomas or GEDs [source: Batalova and McHugh]. But even after making it through the secondary school system, their illegal status prevents all but a small fraction of that group from moving on to college, possibly stymieing their educational achievement, career paths and earning potential. This facet of the U.S. immigration debate that focuses on children who are brought into the country illegally by their parents' choice is a contentious one. Should the underage illegal immigrants growing up and moving through the American educational system be punished, deported or offered a chance at citizenship?

The Development, Relief and Education for Alien Minors Act, originally introduced in 2001 by Senators Dick Durbin (D.-Illinois) and Orin Hatch (R.-Utah), aims to incentivize educational achievement and encourage undocumented youth to pursue legal residency in the United States. Better known as the DREAM Act, the legislation would pave a pathway for undocumented immigrants toward legal U.S. residency via higher education or military participation, and also give them the opportunity to apply for legal permanent resident status.

Yet plenty of politicians aren't keen on the DREAM, as evidenced by its failure to pass through the House and the Senate to the President's desk. Despite persistent efforts to reintroduce the bill, slip it into other legislation and broker for votes, the DREAM Act has fallen short in Congress five times. In fact, in December 2010, the last time the DREAM Act was up for a Senate vote, Sen. Hatch declared that he'd be voting "no" on the legislation he co-sponsored almost a decade prior [source: Wong].

Though defeated yet again, the DREAM was revived once more when Senators Harry Reid (D.-Nevada) and Durbin brought it back to the congressional floor on May 11, 2011. At the same time, the bill's opponents remain adamant that the legislation is merely an amnesty program that would imperil, rather than secure, U.S. borders. 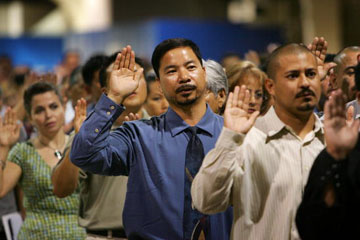 The DREAM Act would open a pathway to U.S. citizenship.
David McNew/Getty Images

Not just any illegal alien wishing to attend college or join the armed forces could automatically pursue the DREAM of full U.S. citizenship. In order to qualify for the policy's provisions, immigrants would be required to meet the following criteria [source: White House]:

From there, potential DREAM Act recipients, sometimes referred to as DREAMers, would be granted a conditional permanent resident status in the United States, which would serve as an intermediate step on the way toward legal permanent resident status. DREAMers would have a six-year window to either complete two years of post-secondary education or two years of military service. Following that trial period, DREAMers could apply for U.S. citizenship. That way, as the Obama administration has emphasized, the people in this group could become active, tax-paying American citizens who would have a positive impact on the federal economy and national security.

There's disagreement over the possible economic impact of the DREAM Act. On one hand, analysis from the Congressional Budget Office estimated that passing the DREAM Act would result in $2.3 billion in federal revenues over 10 years from the new taxpayers [source: Congressional Budget Office]. But DREAM Act opponents have countered that the legislation would stress an already depressed economy. The Center for Immigration Studies calculated that an influx of 1 million DREAMers into public colleges and universities -- each of whom would receive a $6,000 tuition subsidy annually -- would cost taxpayers more than $6 billion per year, negating any income tax boon the DREAMers might drive in the long term [source: Knickerbocker].

Economics aside, immigration is one of the most polarizing issues in U.S. politics today. By opening up a path toward full citizenship for undocumented people under 35 years old, the DREAM Act has been interpreted as a form of amnesty for illegal immigrants, which many politicians oppose. For that reason, Senator Orin Hatch, a Republican from Illinois who originally co-sponsored the legislation, withdrew his support in 2010 when Senators Harry Reid (D-Nevada) and Dick Durbin (D-Illinois) reintroduced the bill and attempted to fold it in to the defense authorization bill. Instead, Sen. Hatch shifted his immigration focus toward enhancing border security [source: Wong].

The Obama administration has repeatedly underscored the multiple requirements for qualifying for DREAM Act assistance, as outlined above. DREAMers wouldn't be permitted to petition for citizenship for foreign relatives, in which case the legislation could function as a gateway for immigrants to enter the country more easily. In addition, the DREAM Act only allows recipients to qualify for federal student loans that they must repay, rather than free federal money, such as the Pell Grant. And the estimate of 11 million undocumented people living in the United States may imply that, whether the DREAM Act is ever passed or eventually fades away, the reality of undocumented youth in the United States remains.

Undocumented Youth and the DREAM Act 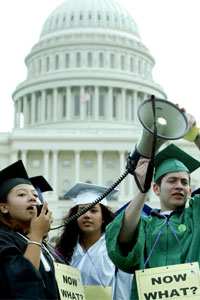 Immigrant students rally in Washington, D.C., for the passage of the DREAM Act.
Alex Wong/Getty Images

With an estimated 11 million undocumented immigrants residing in the United States, the pool of potential DREAM Act recipients is sizeable. A 2010 study from the Migration Policy Institute estimated that about 2.1 million undocumented youth would be eligible to apply for the citizenship program [source: Batalova and McHugh]. However, barriers to entry including low educational achievement, poor English skills and poverty would slash the number of potential DREAMers down to 825,000 [source: Batalova and McHugh]. For instance, the Congressional Budget Office estimated that the Department of Homeland Security would charge DREAM applicants $700 to process and grant their conditional resident status, not to mention the added expense of attending college [source: Congressional Budget Office].

As the DREAM Act cycles through Congress again, some states, including California, New York and Maryland, have introduced their own versions of the DREAM Act to extend in-state tuition to undocumented students. And amid the political debates, a small minority of undocumented immigrants is already attending college. According to data from the American Association of State Colleges and Universities, roughly 3,250 to 6,500 undocumented high schoolers proceed to higher education [source: Miranda]. One such person who graduated from an American college and has emerged as a prominent voice in the DREAM Act debate is Jose Antonio Vargas. In a confessional story in The New York Times magazine, the Pulitzer Prize-winning journalist described the lies and forged documented that he had to wield in order to move through high school to college and into the working world at the Washington Post and Huffington Post as an undocumented immigrant from the Philippines [source: Vargas].

If the DREAM Act had passed in 2001, Vargas could've attended college with a conditional permanent resident status and by now have applied to become a legal U.S. resident. But the journalist remains undocumented, and the next-best option his immigration lawyers have presented involves returning to the Philippines for 10 years, then coming back to the United States. Armed with a powerful pen and influential friends, Vargas' undocumented existence seems a far cry from thousands of teens who have demonstrated in recent years in favor the passing the legislation -- and have been subsequently arrested and deported as a result. Perhaps this time around, their dream might come true -- if Senators Reid and Durbin can rally the 60 votes necessary to get the bill on President Obama's desk to sign before the 112th Congress adjourns in January 2013. But after 10 years of legislative limbo, the DREAM Act may never become a reality.

Top 10 American Political Dynasties
What's the Difference Between a Caucus and a Primary?
How People in China Get Around Internet Censorship