Can democracy work in theory? 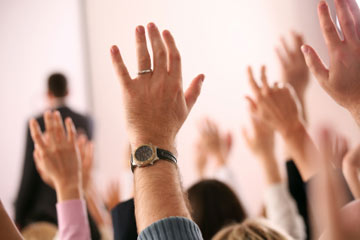 Simply raising your hand in favor or in opposition to an issue at a PTA meeting is a form of exercising the vote in a microcosmic democracy.
©iStockphoto/tomazl

On a small scale, democracy has proven itself to be an effective means for a group to come to a consensus. Everyday examples are all around us: a group of co-workers voting on where to go to lunch, a Parent-Teacher Association deciding whether the school should adopt a dress code.

The basic premise of democracy, that the collective wisdom of a number of people can be employed to arrive at a reasonable decision, has been shown to work as well. In a 2005 book, author James Surowiecki describes a search for missing submarine that went down in 1968. The naval commander assigned to find the missing sub contacted a number of people independently and asked for a best guess of where the sub might be. Each expert received the same information, and each opinion was given equal weight.

In this story, all the elements of a democracy are present. The experts were informed, their guesses were given equal weight, and the individual guesses were combined into a collective whole that served as the basis for action.

It worked on the sub recovery, but can democracy work on a large scale? It's too early to tell if it works in practice, but can it work in theory? Back in the 1920s, John Dewey and Walter Lippmann, a pair of liberal political observers, engaged in a debate about this very question. Through the debate, the pair exposed the key vulnerability that could prevent any large democracy from working properly: the media.

It's no coincidence that modern democracy began to emerge from Greek antiquity at the same time as the public at large was growing increasingly educated. A democracy relies on an informed citizenry. Issues like immigration, healthcare and war are often immense and complex. It's the responsibility of an independent media to properly educate the public about such issues. The media must present all sides of an issue so each citizen can choose the best course of action.

At the vital center of this education is the individual citizen. Lippmann described an "omnicompetent" citizen, one capable of searching out information and making an informed decision that best served the country as the democratic ideal. Dewey argued that citizens needn't be omnicompentent. Instead, they needed to have their natural curiosity stoked by a media that could "interest the public in the public interest" [source: Alterman].

All of this depends on the notion of an informed citizenry, however, which both concluded was too open for cooption. If one group or interest held too much control over the media or the schools, the result was one-sided debate. Without diverse points of view on an issue delivered by the media, democracy fails to function properly.